The UN head office in New York formed the backdrop for the launch of Adidas’ Ocean Shoe on 29 June. In partnership with Parley for the Oceans, Adidas presented the prototype of a shoe made entirely of recycled illegal driftnets fished from the ocean. One can hardly think of a more prestigious event.

Will the people who are soon buying this trendy shoe think they are making a contribution to the cleanup of plastic soup because ocean plastic will be recycled? Or will they be contributing to the green image of Adidas? The corporation claims to be sustainable, but provides no opportunity to return used plastic shoes for recycling. Adidas produces 600 million shoes a year with plastic soles.

When the hip ocean shoe comes in production, it will, like plastic clothing and shoes with plastic soles, contribute to plastic soup. Shoe soles wear down and the micro shavings end up, from the street via the stormwater systems, in the ocean. One thing is certain, microplastics can never be retrieved from the water ever again.

We need to ditch the idea that we can clean up the oceans and move towards measures that prevent plastic ending up in the ocean in the first place. If a company like Adidas was really concerned about the oceans, it would take a raft of preventative measures and give them the highest priority. 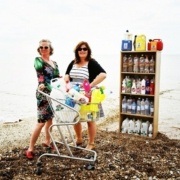