The Ocean Conservancy (Washington, D.C.) does some amazing work; its International Coastal Cleanup has engaged more than 10.5 million volunteers to retrieve over 87,000 metric tons (192 million pounds) of trash from the world’s coastlines over the past 29 years. And it is one of the founding fathers of the Trash Free Seas Alliance, a broad coalition including industry leaders and non-profit organizations united to help solve the problem of ocean plastic pollution.

One of the goals of the Trash Free Seas Alliance, according to its website, is “to reduce and, where possible, reinvent products and services that damage ocean wildlife or ecosystems.”

This goal of reduction is notably absent from Ocean Conservancy’s new report, Stemming the Tide: Land-Based Strategies for a Plastic-Free Ocean. The report, financed in large part by The Coca-Cola Company, The Dow Chemical Company, and The American Chemistry Council, focuses on improving waste collection systems in the five Asian countries that contribute most to the plastic soup: China, Indonesia, the Philippines, Vietnam, and Thailand. The strategy presented to put an end to the leakage of an estimated 8 million metric tons of plastic per year includes optimizing local waste hauling systems, increasing waste collection, stopping leakage from dump sites, increasing recycling rates, and improving waste treatment. Through these efforts, the global leakage could be reduced by 45% by 2025, according to the report.

We of course hope to see these efforts implemented. However, the Ocean Conservancy report mentions nothing about reduction through rethinking our throw-away culture, reducing our dependence on single-use plastics, or adding value through deposit systems. 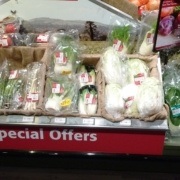