You are here: News Plastic Soupermarket on display at Ekoplaza

As of last week, part of the Plastic Soupermarket will be on display at Ekoplaza on the Stadhouderskade in Amsterdam. The display contains local litter found on the banks of Amsterdam’s largest waterway the  IJ.

British artists McCurdy and Hansky, also known as Dirty Beach, realised a few years ago that much of the plastic litter on riverbanks comes from supermarkets. So they decided to organise clean ups, wash the litter and then relabel it in order to set up a soupermarket full of trash. Ekoplaza provided the infrastructure free of charge.

The Plastic Soup Foundation invited Dirty Beach to the Netherlands for the first time in the summer of 2015, when they set up an art installation using litter from the River IJ. This Plastic Soupermarket went on display in the Tolhuistuin cultural centre during the tall ships event SAIL Amsterdam. The litter from the River IJ and the North Sea confronted visitors with what is to be found in our waterways.

Afterwards, the exhibition relocated to the castle grounds of Kasteel Wijlre in Limburg where it was on display from 26 September until 22 November. This time the Soupermarket shelves were filled with litter found on the beaches of the North Sea, the banks of Amsterdam’s River IJ and the River Meuse in Limburg. The exhibition included an educational programme, developed by Dirty Beach and the Plastic Soup Foundation. Pupils from primary schools in the towns of Wijlre, Maastricht and Gulpen visited the Plastic Soupermarket and found out more about plastic soup, litter and art in a creative way. 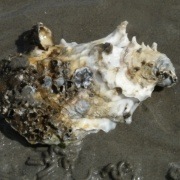