Thousands of plastic bottles have turned beaches on England’s Cornish coast pink. Since last Sunday, bottles of detergent have been washing ashore. The Marine Conservation Society (MCS) reports that the bottles have been identified as Vanish which contains a caustic bleaching agent.

The bottles possibly come from the freight ship MV Blue Ocean which lost a number of containers off Land’s End, the most south-western point of England, in May 2015. An estimated 27,000 tons of plastic bottles fell overboard; so many more bottles are expected to wash ashore.

A similar disaster took place 19 years ago. Back then, around 5 million Lego pieces washed into the sea when a huge wave hit the container ship Tokyo Express and sunk it. As a result, 62 containers sunk around 50 kilometres off Land’s End. Lego pieces are still being washed up on Cornish beaches today.

According to the research institute of the Monterey Bay Aquarium, up to 10,000 sea containers are lost at sea every year. Ocean currents eventually disperse the shipping freight across the whole world.

In a report MCS concludes that twice as much litter washes up in Cornwall than in the rest of the United Kingdom. The reason for this lies in its location as the Gulf Stream carries sea water directly towards the south western coast of England. 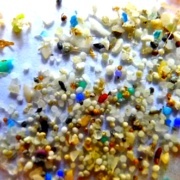 Petition to ban microbeads, UK Government responds
Scroll to top
This site uses cookies. By continuing to browse the site, you are agreeing to our use of cookies. Learn more