You are here: News Albatross, the film: ode to a victim of the plastic soup

Albatross, the film: ode to a victim of the plastic soup

Amsterdam, 18 April 2018 – Half-way through the film, the image suddenly stops. A close-up of an albatross feeding its chick. The albatross parent regurgitates food and slips it into the throat of the hungry chick. The image stops at the point that a blue piece of plastic glides into the chick’s throat. The American photographer and film-maker, Chris Jordan, has worked on Albatross – a love story for our time from the heart of the Pacific for years. The film is about the largest colony of albatrosses in the world on Midway, a remote archipelago in the middle of the North Pacific Ocean, and the devastation that the plastic soup is bringing to this colony.

In 2008, Chris Jordan visited Midway for the first time. He photographed the bodies of chicks full of plastic. The body of a chick degrades, but the pieces of plastic that it contains do not. They remain behind in clumps on the island. His photos are well-known around the world and shook the world at the time. Jordan returned to Midway a few times and decided to make a film about the drama that was taking place. He used the best cameras and sound equipment there is.

Albatrosses are not afraid of humans and Jordan could get very close to them by crawling towards them slowly. His images touch everyone. On the one hand, the graceful movements of these impressive birds, and on the other hand the inability of the albatross to mistake plastic for food. Before the young albatross leave land and take to the sea, they need to empty their stomachs of excess weight. The birds that are unable to expel the plastic are doomed.

The film is highly emotional, and this is exactly the intention of the film-maker. By identifying with the albatross, people start to understand the consequences of our plastic consumption society. Albatross is special in another way too. Jordan is making the film available free of charge. There is just one condition – whoever shows the film, be it in a cinema or at home, may not charge anyone to see it. He himself does not want to earn any money from the misery that we humans are causing and does not want anyone else to do so. Via this link you can request a copy of the Albatross movie for a screening.

As of June 8th, the film will be available for a free permanent download at albatrossthefilm.com where you can now watch the trailer. The Plastic Soup Foundation recently showed the film at the Amsterdam arts cinema Lab111 to an invited audience in the presence of Chris Jordan. 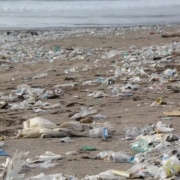 No job openings at the moment
Scroll to top