You are here: News Tens of thousands of pieces of litter cleared up in the Netherlands on World Cleanup Day

Amsterdam, 16 September 2018 – Thousands of participants registered and cleaned up more than 35,000 pieces of litter in The Netherlands on World Cleanup Day. Everything that was found – each individual bottle, can, cigarette pack and plastic bag – was registered in an app on the participant’s phones. As not all participants used the app continually, the final total was probably considerably higher.

A little more than 60% of all litter registered was plastic, followed by paper and metal (including aluminium). The cigarette butt topped the list of “Top 5” items – cigarette filters are made of plastic – followed by cans in second place, and packaging in third place. Bottles came in fourth, and (plastic) cups fifth. 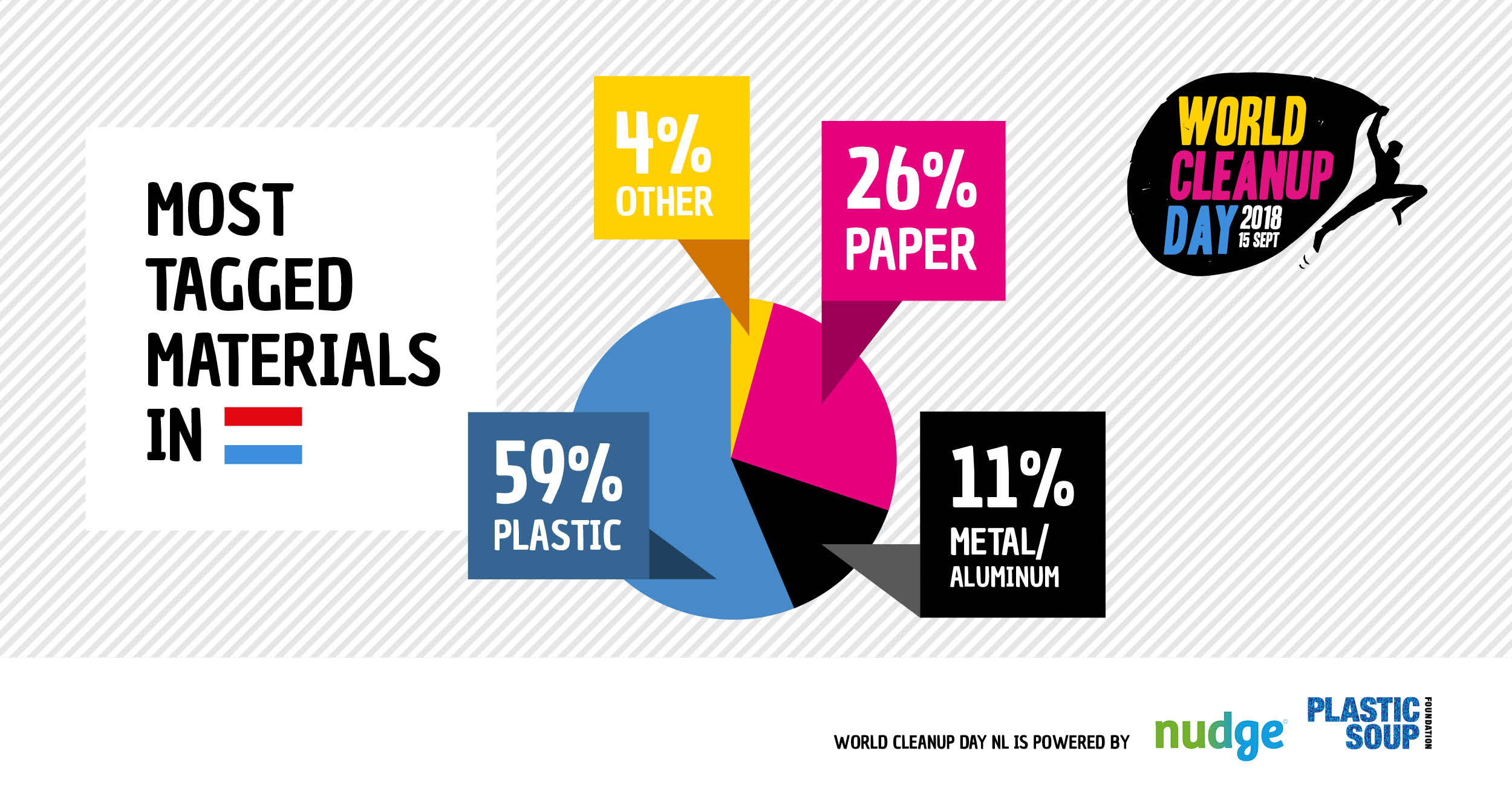 World Cleanup Day was not just another action to help clean up the world. Participants used the Litterati-app to register the litter they found: be it in their own street, their neighbourhood, a nearby park or along the banks of a river. The data gathered will be used to help understand the true nature of the litter problem and as a basis for the development of structural solutions.

“It’s fantastic to see that so many people took part in World Cleanup Day, together we really make a difference”, said Jeroen Dagevos, head of Programmes for the Plastic Sup Foundation. “Collecting this level of data concerning the types of rubbish found and where it is found enables us to make a serious attempt at putting an end to the plastic soup. It’s good to see that the manufacturers are beginning to internalise the discussion concerning the origins of litter. An event like the World Cleanup Day helps them to see how they, themselves, are part of the problem. And that really helps.” 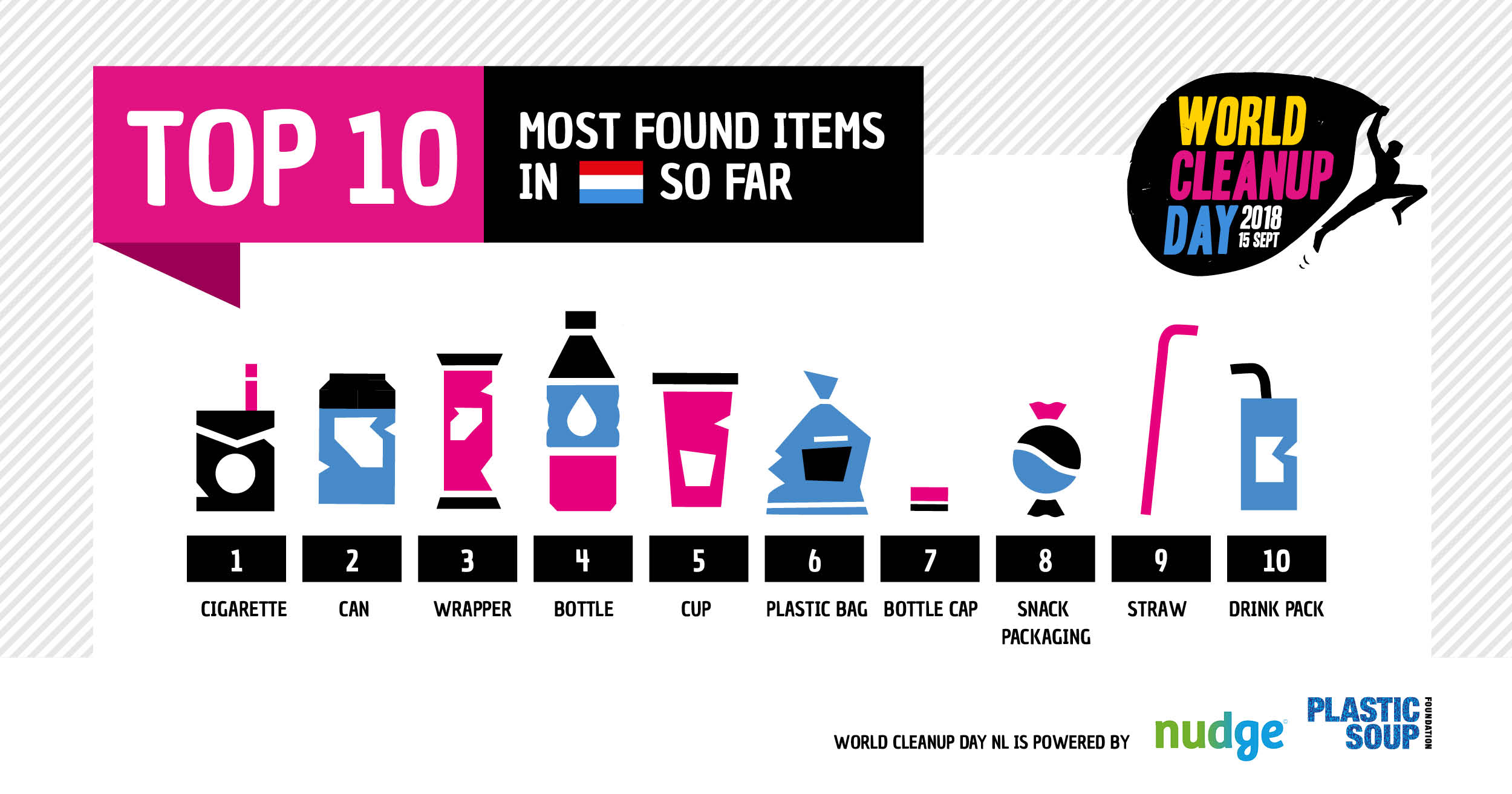 The Litteratti-app on a mobile phone automatically adds the location to each photo made of a piece of litter. Pre-set keywords help to tag each item. In this way it’s possible to not only see which items are found the most frequently, but also the material from which the item is made and the brand or retail chain who manufactured or sold the item. In this way, the nature of the litter problem becomes apparent on a map: the locations where litter is frequently found can be traced right down to individual street level.  This can help in the development of structured planes to improve the situation around, for example, schools, stations, parking areas, sport clubs, supermarkets, fast-food restaurants, parks and tourist attractions. 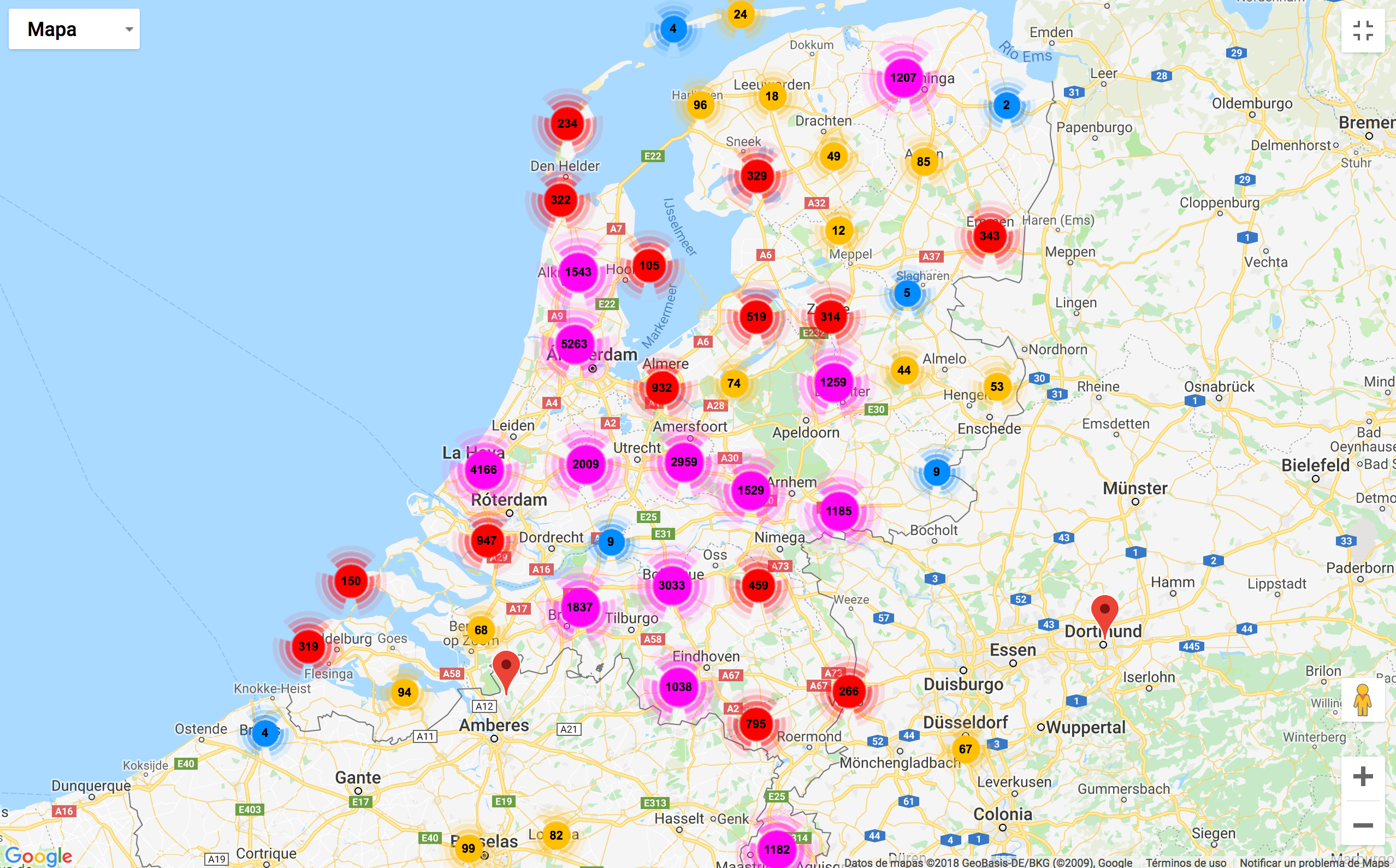 In the past, local authority sanitation departments have often been fighting a loosing battle. Litter that is not cleaned up, or cleaned up in time, stands a good chance of ending up in a ditch, canal or river – and ultimately in the sea. Research has shown that 80% of the plastic soup in the sea originated on land. The app has now been up and running for a year, with almost 2 million items of litter registered worldwide: the most input has come from the US, followed by The Netherlands. On World Cleanup Day, tens of thousands of red dots were added to the map of The Netherlands…. 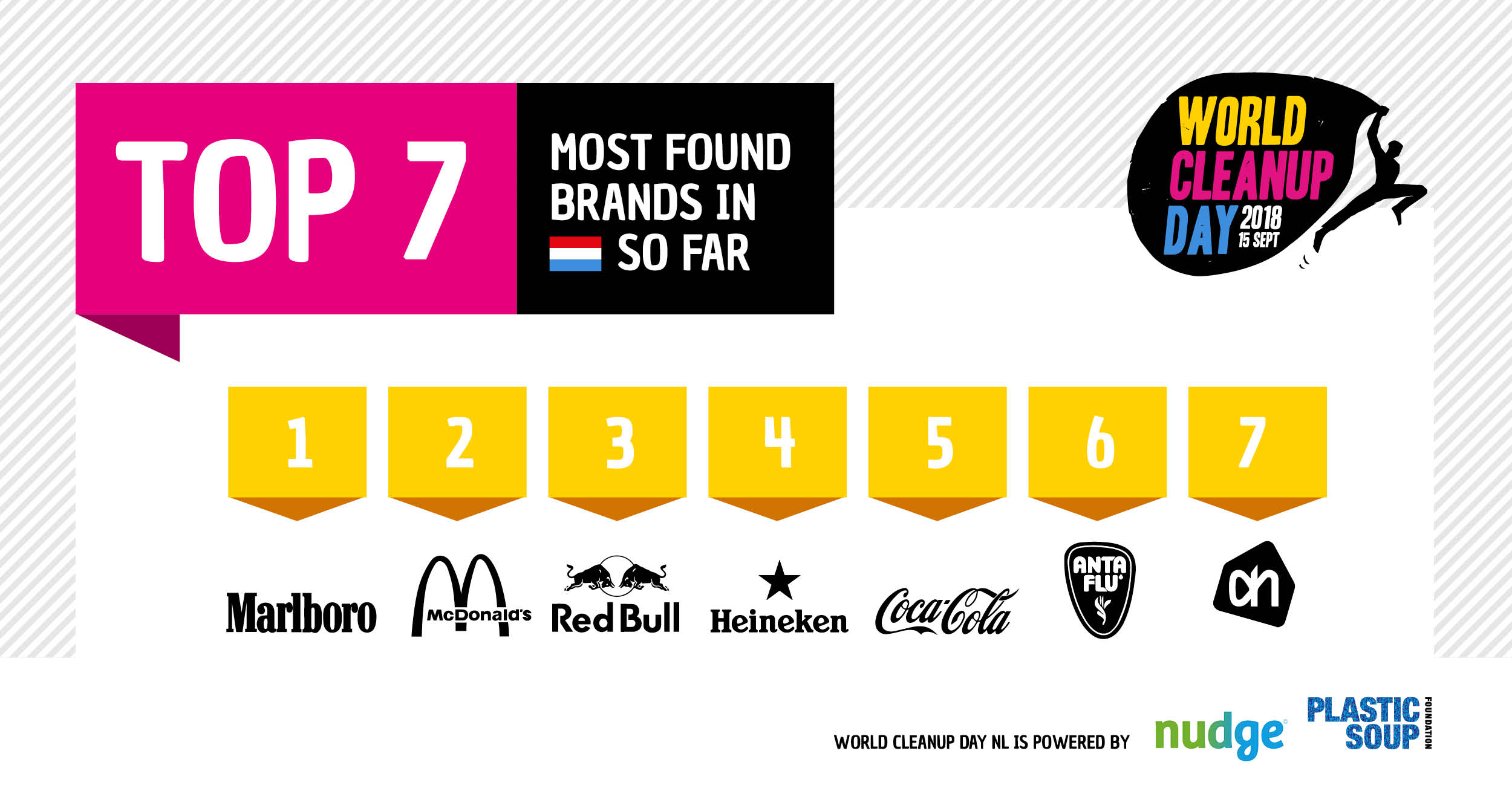 On that day, more than 300 clean-up actions were organised by groups, companies and organisations around the country. Thousands of people took part. The action was coordinated in The Netherlands by The Plastic Soup Foundation and Nudge. The worldwide action ran on a Saturday around the world from New Zealand to Hawaii. It’s estimated that several million volunteers took part in more than 160 countries around the globe, making this the largest clean-up action ever to be organised.

The day started officially in The Netherlands when Merlijn Tinga, alias the Plastic Soup Surfer, surfed in to the yacht harbour in Scheveningen on the world’s first 3D-printed hydrofoil windsurf board made entirely of re-cycled PET plastic bottles. Scheveningen was the end destination for Merlijn after an eight-day sea journey on the board, which started at the mouth of the Seine close to Le Havre, and was undertaken to raise awareness of World Cleanup Day and for the problem of plastic pollution.

The Plastic Soup Surfer was welcomed on the beach at Scheveningen by Berend Potjer, member of the provincial parliament for the province of South Holland and representative of the “Green Left” political party. They together retrieved a washed- up or abandoned plastic bottle from the beach and registered it in the app. A few minutes later, the item became visible on a large screen via the app from Litterati. The litter had become data. 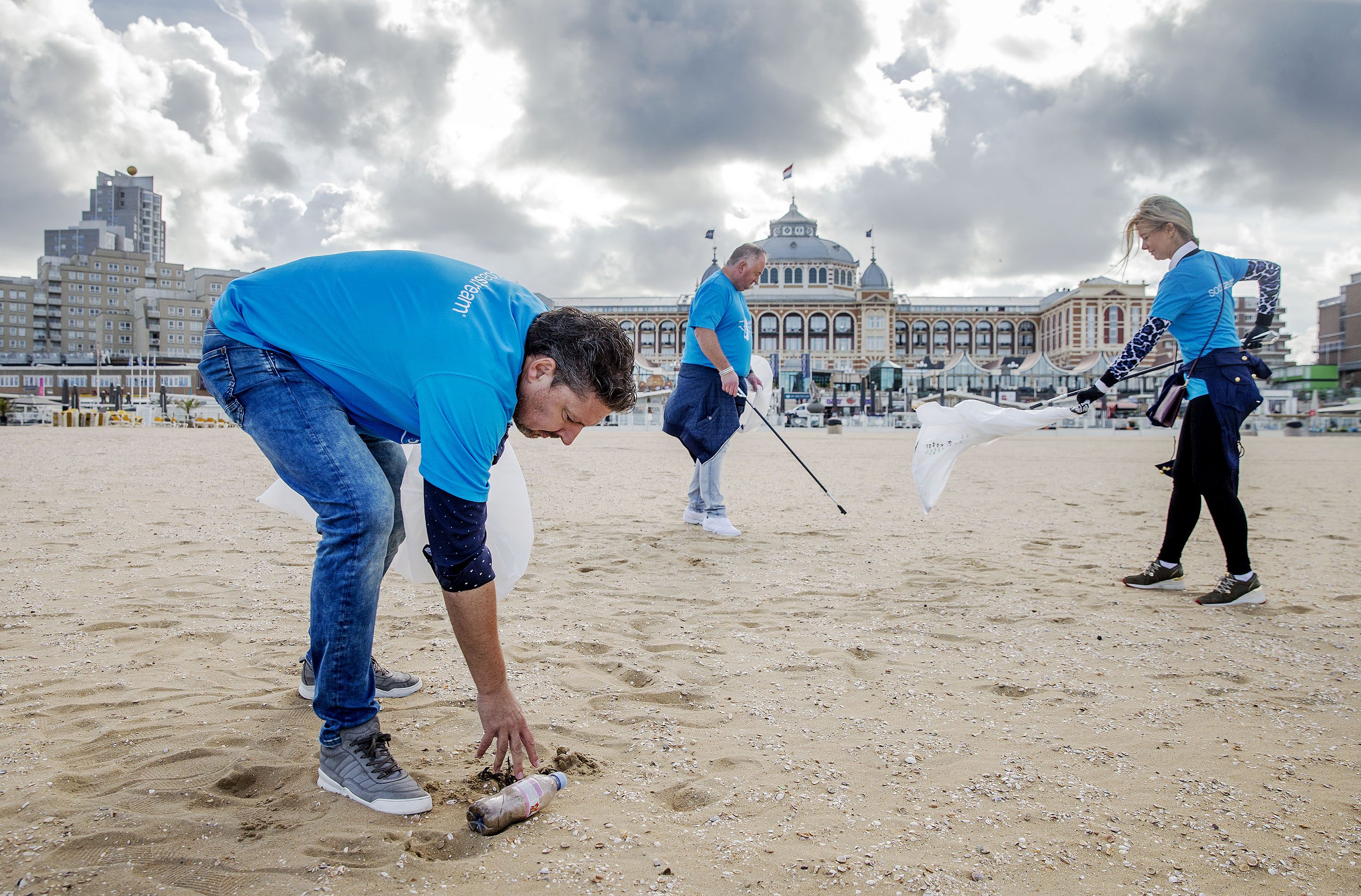 In the World Cleanup Day NL press centre, located in Roompot Holiday Park Kijkduin, a panel discussion was held on the subject of litter and the possible solutions. Participants were Suzanne Kröger (member of parliament for “Green Left”), Rob Buurman (Managing Director Recycling Network Benelux), Jaap Dinkelman (Policy Officer “Clean City The Hague”) and Jeroen Dagevos (Plastic Soup Foundation). Kröger and Buurman were of the opinion that the results of the day highlighted the importance of introducing a deposit system for some kinds of packaging.

“It’s a persistent problem, a deposit system is a practical and necessary initial step”, according to the MP. “After that, we can begin to address the problem of other forms of packaging, sweet and snack packaging and other litter. It’s an irritating and unnecessary problem: let’s solve it”, added Kröger.

A number of Plastic Soup Foundation Ambassadors also helped with the clean-up actions: singer-songwriter Roos Blufpand in the Transwijk park in her home town Utrecht, bag designer Omar Munie from his shop on the Noordeinde in The Hague, and 3FM-dj Sander Hoogendoorn, also in Utrecht.

More about the World Cleanup Day can be found on our website www.worldcleanupday.nl

Messages in social media can be found at #WorldCleanupDayNL 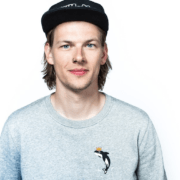 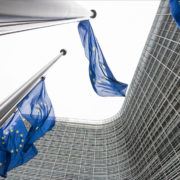