Amsterdam, 24 May 2019 – Oxygen producing bacteria that live in the sea suffer from chemicals, which are added to plastics during the production process. Australian researchers discovered that these chemicals leach from the plastic and interfere with the Prochlorococcus bacteria, which produces about 10% of the oxygen we breathe. Their cutting-edge study is published in Communications Biology and a summary is available here.

Sunlight converted into oxygen by bacteria

The Prochlorococcus bacteria were discovered only thirty years ago. With the help of sunlight these tiny microbes convert carbon dioxide into glucose and oxygen is a by-product of this process. These abundant bacteria are critical to the marine food web and carbon cycle. Despite the fact that the organism is essential for these systems, the effects of plastic pollution on this species have not been studied before.

These bacteria are mainly present in the gyres, the circulating currents in the oceans, where plastic debris is abundant too. The effects of these chemical additives leaching from the plastic have been studied in a laboratory setting. And the research showed that the chemicals interfered with growth, photosynthesis and oxygen production. However, the researchers point out that concentrations used in the laboratory tests differ from the concentration of these chemicals in the oceans. Therefore, the importance of this study lies mainly in the discovered effect.

Maria Westerbos, director of the Plastic Soup Foundation: “We are shocked by these discoveries. The plastic soup appears to have an influence on the oxygen production on earth. More research into this effect should be a high priority.” 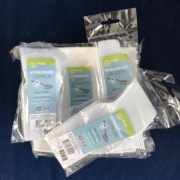 Plus Supermarket works around the European Ban on single-use plastics
Scroll to top
This site uses cookies. By continuing to browse the site, you are agreeing to our use of cookies. Learn more