You are here: News WHO wants more research into the health effects of microplastics

WHO wants more research into the health effects of microplastics

Amsterdam, 22 August 2019 – The World Health Organization (WHO) has released for the first time a report on the potential danger of microplastics in tap water and bottled water. The UN organization’s current assessment is that plastic particles in drinking water do not seem to be a problem, but because hardly any research has yet been done into the effects of microplastics on the human body, they are calling for more research. And WHO will have its way: on 3 October of this year, the Plastic Soup Foundation and ZonMw, in collaboration with the Plastic Health Coalition, will make available the first results into the health effects of microplastics on the human body.

The WHO report Microplastics in drinking-water looks at one way that microplastics can get into the human body, namely through drinking tap water or bottled water. In countries such as ours, most microplastics are removed during the process of making drinking water. Possible risks from the remaining particles include physical damage to the body, and chemicals and pathogenic microorganisms that adhere to plastic. Given the low concentrations in treated drinking water, according to the report, the health risk is low relative to other causes of disease.

The report points out that more than two billion people do not have access to safe drinking water. These people may be exposed to much higher concentrations. Another problem is what happens to the microplastics that are removed during the production of drinking water. WHO states in the report that there is a lack of information about the toxicity of nanoparticles. These ultra-small particles are potentially dangerous because they can go anywhere in the body. The report states that hardly any research has yet been carried out into the effects of microplastics on the human body. This type of research therefore has high priority.

On 3 October, during the Plastic Health Summit, the first interim results will be presented from fifteen Dutch scientific studies into the effects of eating, drinking and breathing microplastics on the human body. WHO will get what it wishes for. Today’s knowledge gap is tomorrow’s science.

Maria Westerbos, director of the Plastic Soup Foundation: ‘The WHO report has been compiled on the basis of the literature, but not on the basis of real research into the effects of microplastics on our bodies. We are showing the world for the first time on 3 October what the possible effects are. Only when we know more will we be able to conclude whether our health is in danger or not.’

Photo: Cover of the WHO report. 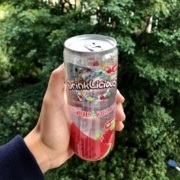