You are here: News Ocean Cleanup goes to the rivers

Ocean Cleanup goes to the rivers

Amsterdam, 28 October 2019 – Boyan Slat is going to expand his field of activity. On 26 October he presented The Interceptor to the world, an installation that is to remove floating plastic from rivers in order to prevent it from ending up in the ocean. Ocean Cleanup has been working on this self-operating capture system, which can capture 50,000 kilos a day, for the past four years. It is designed to be produced in large numbers. The first two are already operational.

Presentation of The Interceptor

Ocean Cleanup calculated that 80% of all plastic rubbish in the oceans is transported by a thousand rivers. It is obviously important to capture that plastic before it reaches the ocean. The goal of Ocean Cleanup is to have Interceptors at work in these thousand most polluted rivers by 2025. Inventor and entrepreneur Boyan Slat explained his latest project in his presentation.

The Trash Wheel has been in Baltimore’s harbor for years, a clever system that takes the rubbish out of the water. The Interceptor is a modernized version of it. The idea is the same: there is a floating arm that guides plastic to a conveyor belt that comes out of the water at an angle. At the end of the conveyor belt, the rubbish is collected in a container. The bin is brought ashore to be processed. Both systems use running water and solar energy, both do not interfere with shipping and are not harmful to fish.

A fine example of engineering work

At The Interceptor, everything is designed not only to collect waste as efficiently as possible but also to be able to install the system in as many places as possible. Thanks to automatic notifications, the local operator knows when the bins are full and need to be emptied. Since the collection capacity is around 50 cubic meters, these are efficient collection cycles. Local authorities will no doubt look with great interest at the results of the prototype (in Jakarta, Indonesia) and that of the second one, which works in one of the world’s most polluted rivers (the Klang in Malaysia). More details about The Interceptor can be found on the Ocean Cleanup site.

Maria Westerbos, director of the Plastic Soup Foundation: ‘We congratulate Boyan Slat and his team with this revolutionary design. At the same time, we would like to point out that the ultimate solution for the plastic soup is not the efficient capture of plastic, but a much lower use and less production of plastic’. 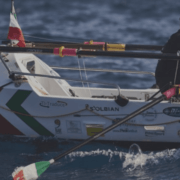