You are here: News Conservative Estimate: 136,000 Tons of Plastic Escape from the Ocean Every Year

Conservative Estimate: 136,000 Tons of Plastic Escape from the Ocean Every Year

New research has revealed a peculiar phenomenon: thousands of tons of plastic can escape from the ocean every year in the form of micro and nanoparticles. The wind carries the tiny plastic particles which then, settle on the land. This phenomenon has been investigated for the first time and described in an article published in the (online) scientific journal PLOS ONE.

For a long time, it has been assumed that plastic, once in the sea, remains there forever (apart from the plastic that washes ashore or gets fished out). The common knowledge was that plastic falls apart into smaller pieces, sinks to the bottom, or ends up in living organisms. Now, it has been made plausible that plastic can also escape from the water through the air, just like sea salt, bacteria, viruses, and algae.

The microplastics are released into the air by the atomization of the seawater. Strong wave movements and turbulence in the water lead to the bursting of air bubbles. As a result, tiny drops of water that may contain microplastics are formed. Along this path, plastic particles end up in the clouds and are carried away by the wind.

French researchers analyzed the air on a ten-meter high dune top on the Atlantic coast. By counting the captured particles in different wind directions, they were able to determine how many microplastics were transported to the coast by land-based sea fog. The researchers even attempted a calculation on this basis; worldwide, 136,000 tonnes of plastic would end up on land by air from the sea every year. That is a fraction of what ends up in the ocean every year.

MICROPLASTICS IN THE AIR

An increasing number of studies analyze the presence of microplastics in the air. It is well known that we inhale microplastics and that they are found everywhere, even in remote areas. Previous research has shown that microplastics can easily travel a distance of 95 kilometers through the air, but can probably cover even greater distances. Analysis of the air in London, Paris, Hamburg, Shanghai, and Dongguan by various research groups has already yielded a lot of data on the types of plastic, precipitation, and weather conditions. But the fact that these microplastics can also come from the sea is new.

From micro to nano

Fragmentation of plastic leads to ever smaller pieces. Friction and UV radiation caused by sunlight are important factors. The authors emphasize that, in combination with waves, they accelerate the fragmentation process. This shows that the presence of the smallest particles (the nanoplastics) in the environment and the air is increasing (and will continue to do so).

Read more
Twice as many microplastics in the ocean than assumed 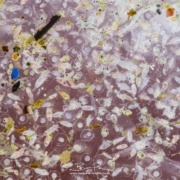 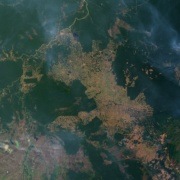