September 2019: Up from 3rd to 1st place: unlike Max Verstappen, Red Bull’s cans did manage to get to the top – of the top 6 of litter found on World Cleanup Day 2019, to be precise. We know from a reliable source that Red Bull has taken this seriously and is working behind the scenes on a plan to step down from this embarrassing spot.

Red Bull doesn’t just ‘give you wings’, their cans are themselves also equipped with wings. I’m sure of it, seeing them soaring through car windows and flying high through the air after take-off from bicycles, scooters and hand palms and then preferably landing somewhere… in nature.

And that’s not only a problem for cows and other animals, as explained in the previous episode of this series, but cans also contribute to the plastic soup. They have a plastic layer on the inside, as you can see in this experiment with hydrochloric acid.

Plastic Soup Foundation is aware that Red Bull – which according to its own words has always had sustainability in its DNA – is doing its best. Therefore we’ve already paid them a compliment, because the company can be rightly proud of the fact that the cans are 60% lighter than before, 100% recyclable and that the transport of such cans costs less energy than that of plastic or glass bottles.

However, recyclability does not mean that they are actually recycled. To make that happen, they will have to be returned first. But there is a miracle cure for this: deposit schemes. In Norway and Germany, 97 to 99 percent of bottles and cans with a deposit are being returned.

And even the rather complicated system in Brussels, where people could hand in empty cans at only three collection points and then receive a voucher of only 5 cents, which they could then exchange for groceries at a very limited number of stores, yielded no less than 40,000 cans in just over a month last year!

So the question is why Red Bull – with its ‘sustainable’ DNA – has still not spoken out in favour of deposits on cans. Would the Austrian company, which every year sells 7.5 billion cans of the sweet caffeine drink, actually realize how much of those are spreading their wings and ‘fly away’?

Read more
Paint: a great source of microplastics at sea 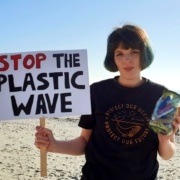