You are here: News Scientific bundle on plastic nanofibers and microfibers

These questions were discussed at a workshop of Wetsus (European Centre of Excellence for Sustainable Water Technology) in Leeuwarden last November, where scientists from different disciplines came together. Our director, Maria Westerbos, gave the introductory presentation.

The presentations and the outcome of the discussion are now bundled under the title: Synthetic Nano- and Microfibers (R.M. Wagterveld et al. ed.).

The role of water treatment plants

Water treatment plants are not designed to stop nano and microfibers, but for the most part, they do. The fibres, mainly from washing clothes, are captured up to 98% in sewage sludge. The part that is not captured ends up in surface water. That’s a lot of microplastics because of the massive amounts of water that the installations process. Of all the microplastics that are let through, about 80% are fibres.

In many countries, the sludge is spread over the land as manure. In the Netherlands, the sludge is burned, but that is an exception. Where there are no water treatment plants at all, and that applies to about 80% of the world’s population, the fibres end up directly in the environment.

Water treatment plants are currently not suitable to reduce the number of microplastics that end up in the environment. On the contrary, they promote the spread of microplastics in waterways and on land. Technical modifications to prevent this are costly and have their limitations. Filters that stop nanoparticles do not exist, and fibres are not easy to stop because of their elongated shape with a small diameter.

People are exposed to the particles in three ways: inhalation, ingestion and skin contact. To better understand the health risk to people, you need to assess both exposure and toxicity. Improved methods are needed, and standards must be agreed upon. So far, inhalation through occupational exposure has been investigated best. Fibres appear to penetrate more easily through the nose and mouth than spherical particles and also penetrate much deeper into the lungs.

Another underexposed aspect are pathogenic bacteria that attach themselves to plastic. In particular, plastic-contaminated waterways to which untreated sewage is discharged are potentially risky. So far, no harmful effects of pathogens have been identified for organisms living in the water, but extensive multidisciplinary research is needed to assess this risk. 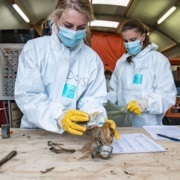 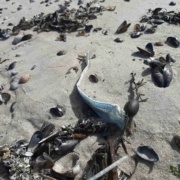