You are here: News Veolia blatantly sells itself as an ‘ecological waste doctor’

Veolia blatantly sells itself as an ‘ecological waste doctor’

How do you convince shareholders of your acquisition ambitions? You tell a strong story! And that’s what waste giant Veolia did this week with an unexpected announcement to take over the French waste management company SUEZ in the long term. This takeover would create a ‘World Ecological Transition Champion’. With this kind of beautiful words, Veolia hopes to throw sand in our eyes, but we at Plastic Soup Foundation don’t fall for that.

Of course, reports about takeovers come out of the blue more often and cannot be called alarming in itself. What is disturbing is the way in which this mega fusion is announced; namely as the ‘World Champion of Ecological Transformation’!

An entirely misplaced name, because this merger has nothing to do with making the company ‘ecological’, nor does it have anything to do with improving processing, but is purely aimed at increasing market share and achieving better cost-efficiency.’

Earlier this week, a frightening Interpol report came out on the increasing criminalization of international trade in plastic waste. It shows that before 2018, about 85% of all EU waste plastics were shipped to China. After China was forced to close its doors to our waste, it shifted to countries in Southeast Asia that had no processing capacity.

According to the report, even France, home to Veolia and Suez, is currently unable to cope with the large quantities of plastic waste it produces, resulting in illegal shipments, dumping and illegal domestic incineration. How is this ‘ecological transition’?

With phrases such as ‘garbage collectors as experts in circular economics’, Veolia creates an image in which the company transforms itself into a miracle doctor. The feeling they give about ‘we solve it; it’s only an ecological transition’ is disturbing. As long as everyone continues to believe that waste processing is entirely circular, we are facing a dangerous future.

Waste processing and recycling are, of course, highly necessary to get the problem under control. Still, unfortunately, the necessary economies of scale will not be achieved, and we will see little high-quality recycling that can prevent us from being flooded by new plastics.

The plastic waste streams are too complicated, the global scale of the waste problem is beyond comprehension, and the possibilities to collect and process everything is minimal. In addition, the price of oil is so low that the sales of plastic recyclate have virtually stopped. The chance of shifting from recycling to more incineration or landfill has, therefore become extra high. This kind of ecological promises from Veolia can be called very misleading.

WASTE PROCESSING IS MAINLY ABOUT MONEY

In the Netherlands, we are in the fortunate circumstance that waste collection is in any case well organized. This is in contrast to many other countries worldwide where economic opportunities or infrastructure prevent this. Even in the Netherlands, it is often not entirely clear what happens to the waste, but it is out of our sight, and we trust that it will turn out well.

Much has changed since the 1950s; where waste then still had local value and purpose, the system was turned upside down when household plastic waste entered the system. All of a sudden, we had no choice but to dump or incinerate it centrally, resulting in a lot of transport movements. As a result, large-scale waste processing became big business. And due to the increasing growth in waste, we see that more and more big players are emerging on the market in which the volume, i.e. claiming as much waste as possible, is the primary motivation..

Harmen Spek, Manager Innovations & Solutions of Plastic Soup Foundation: ‘The real solution, of course, lies in reducing the waste stream by simply using less plastic, because you don’t have to process what doesn’t come with it. Megaphrases like these don’t help to reduce the amount of plastic waste, stronger: they maintain the status quo because volume guarantees and even scaling up are necessary for secure and ‘healthy’ business operations. But let’s try to tell a real story about plastic waste in which we also take a close look at the effect on the circular economy. Keeping on proclaiming that it’s all going to be all right is out of date. Consumers and shareholders are entitled to an honest story, so Veolia should be deeply ashamed of itself.’ 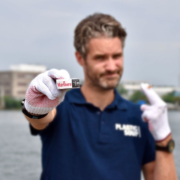 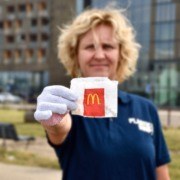 At no.3: the packaging of McDonald’s
Scroll to top
This site uses cookies. By continuing to browse the site, you are agreeing to our use of cookies. Learn more