You are here: News Multinationals keep the plastic soup alive through the Alliance to End Plastic Waste

It was two years ago this month that multinationals founded the Alliance to End Plastic Waste AEPW, an NGO to combat plastic pollution. In five years, they would spend 1.5 billion dollars to rid the world of plastic waste.

The participants have a shared interest in the production and application of plastic. For example, Shell is investing billions of dollars in a new plastic plant and is one of the founders of AEPW.

The underlying strategy of AEPW is analyzed in detail in the report Talking Trash (September 2020), drawn up by the Changing Markets Foundation. This report concludes that these and similar industrial initiatives are fighting the plastic soup in name only but are aiming to keep the production and use of plastic from being compromised.

The focus should not be on (international) legal restrictive measures. Instead, AEPW focuses on appealing local projects aimed at cleaning up plastic or recycling.

The Indian non-profit Renew Oceans used catch screens to remove plastic from the Ganges near the holy city of Varanasi. The AEPW embraced Renew Oceans as a model project and presented the capture method as promising and applicable to other places. The alliance predicted that thanks to the Renew Oceans capture system, no more plastic would flow into the ocean through the most polluted rivers in the foreseeable future.

However, the Renew Oceans project had been up and running for less than six months, and its collaboration with AEPW ended last October. AEPW’s 2019 annual report stated that Renew Oceans would be capturing more than 100 tonnes of plastic on the Ganges by 2020. In reality, this was no more than one tonne, say investigative journalists who spoke with Renew Oceans employees.

Other parts of the project also failed. For example, people could hand in waste plastic in exchange for vouchers, and the captured plastic would be recycled. Nothing came of it.

A GREAT OPPORTUNITY FOR MULTINATIONALS TO MAKE A REAL DIFFERENCE

The smokescreen that AEPW throws up with these feel-good projects is exceptionally harmful. It obstructs the view of the systemic change that is needed to overcome the plastics crisis.

If the multinationals want to take responsibility, they have an excellent opportunity to do so now. Next month, in the United Nations framework (UNEA 5), the member states will discuss a proposal for an international plastics convention. Speaking out in favor of an international treaty increases the chance that it will be adopted and that the plastic soup will be effectively tackled.

So far, AEPW has remained silent. 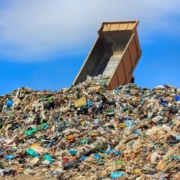