You are here: News Call to the Cabinet: support a tax on new plastic in worldwide treaty

Call to the Cabinet: support a tax on new plastic in worldwide treaty

A levy on new (virgin) plastic would slow down the production and use of plastic and enable recycled plastic to compete more effectively. This is the most obvious instrument that can be used in the battle against the plastic soup. The Plastic Soup Foundation has always argued for a levy like this.

At the request of the Dutch Government, the research bureau CE Delft assessed the feasibility of a national levy on new plastic. The exploratory research (in Dutch) showed that this could be an option, but that an international levy would be much more effective than a national levy.

Through the European Union, the Netherlands is a supporter of an international plastic treaty under the flag of the United Nations. A decision will be taken in February next year at the second meeting of UNEA-5. The Dutch Government should not only consider a national levy on new plastic, but should mostly support an international levy as an essential part of the UN treaty.

NATIONAL LEVY IS NOT EASY

CE Delft’s analysis is crystal clear. The most obvious step would be to tax the raw materials of plastic (nurdles, powders). This would affect 15 companies and importers in the Netherlands. However, there is one problem with a national levy – companies would import plastic products from abroad that are not taxed and this would undermine its effectiveness.

The recommendations therefore include making the case for a levy on polymers in the EU. CE Delft’s report however does not address an internationally binding plastic treaty through which a levy could be imposed worldwide. This is unfortunate as the opportunity is now there.

MOTION OF THE HOUSE OF REPRESENTATIVES

CE Delft’s report (in Dutch) echoes a motion (in Dutch) submitted by the Partij voor de Dieren (party of the animals) to the House of Representatives in November 2020. The motion requests the Government to look into the possibility of a levy. The trigger for the motion was the low oil price in 2020. This made new plastic so cheap that for a while there was no market for recycled plastic.

Hundreds of countries, including the whole European Union, have expressed their support for an international treaty to reduce plastic pollution under the flag of the United Nations. The recent G7 top in Cornwall supports this initiative with the following words.

We will accelerate action to tackle the increasing levels of plastic pollution in the ocean from all sources – land and marine – including by working through the UN Environment Assembly on options including strengthening existing instruments and a potential new global agreement or other instrument to address marine plastic litter, including at UNEA-5.

This support includes the support of the United States as part of the G7. The new position taken by the country under President Biden is crucial. Before he became President, the US consistently rejected this type of treaty in favour of the interests of the national oil and gas industry.

IS A WORLDWIDE LEVY UNLIKELY?

Thanks to a different political composition in the United States, the G7 reached an agreement about a worldwide corporation tax. Large international companies cannot avoid paying tax anymore and they play countries against each other. The countries in which they operate will tax them from now on. These agreements will bring about a level playing field. What appeared impossible for a long time is suddenly a reality.

The way may now be paved for a worldwide levy on new plastic. Multinationals such as Nestlé have already expressed their support. They see themselves as being confronted by countries that uphold different regimes – such as some banning plastic bags and others not – and they would benefit from worldwide regulations and a level playing field. Now that scientists have designated the plastic soup as a planetary boundary, everyone understands that environmental problems can only be addressed internationally and that binding agreements are indispensable.

PLASTIC PACT IS NOT BINDING

Last February, during the first UNEA-5 meeting, Minister for the Environment and Housing Stientje Van Veldhoven (D66) argued for the international enforcement of the Plastic Pact. But that is exactly what should not be done. Plastic producers such as Shell have not signed the Plastic Pact and even if they do so, there are no sanctions should the agreed targets not be achieved.

Last year, Members of Parliament asked the Minister whether the reuse of plastic could be advanced when new plastic was so cheap. They also asked whether the Minister would address Shell (as a producer of plastic) on the negative effects of investing in the production of even more plastic. Van Veldhoven answered (in Dutch) that the investment decisions of Shell did not fall under her remit.

THE NETHERLANDS MUST TAKE ITS RESPONSIBILITY

If the Netherlands is serious about tackling the plastic soup, a levy on new plastic must be imposed and the Netherlands must actively support a binding UN international plastic treaty instead of hiding behind non-binding agreements to which plastic producers such as Shell would not join anyway.

There is growing support for an international plastics treaty. The question is now not if there will be one, but what agreements will it contain.

UV-328 is a toxic substance that the plastic industry often uses. A proposal to ban this substance under the Stockholm Convention is being challenged by industry. 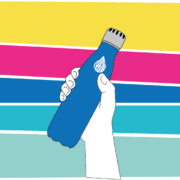