You are here: News Chemours to the European Court for hazardous GenX

PFAS, the chemical substances present in products like anti-stick pans and raincoats, are so hazardous for the environment and human health that there is talk about banning them. But the chemical company Chemours (previously Dupont) in Dordrecht continues to fight a previous European decision to qualify GenX – PFAS type substances – as a substance of high concern.

The acronym PFAS stands for poly- and perfluoroalkyl substances. It is a collective name for about 6,000 substances that are processed in all sorts of products. PFAS enter the environment, and thus our food and drinking water, through waste and production processes. PFAS are:

The particular properties differ between types of PFAS and there is still much uncertainty about many PFAS. What is known is that it may have a negative impact on our immune system, fertility and the development of our unborn children. PFAS may also be carcinogenic, according to the Netherlands National Institute for Public Health and the Environment (RIVM) (in Dutch).

THE DUTCH INGEST TOO MUCH PFAS

The European Food Safety Agency (EFSA) concluded that PFAS in food can have a negative effect on health even at low concentrations. EFSA set a standard: people may ingest no more than 4.4. nanograms per kilo of body weight per week. The RIVM adopted the standard and concludes that people in the Netherlands ingest too much PFAS through food and drinking water.

On 15 July, the Netherlands and four other European countries informed the ECHA that they would ban PFAS. It was a procedural step that would lead to restrictions that would take effect in 2025. For the first time, a whole group of substances (6,000 substances) would be banned. This means that all uses of PFAS would be banned with the exception of essential or necessary applications. A total ban would also mean that one hazardous PFAS substance may not be replaced by another, as Chemours did by replacing PFOA (perfluorooctanoic acid) with GenX.

Unsurprisingly, Chemours is fighting the European ban. If a ban is passed, much of its production will come to a halt in 2025. The daily newspaper the Algemeen Dagblad (in Dutch) cites a spokesperson from the company who stated that the definition used in the restriction proposal is too wide for ‘an effective, science-based evaluation and regulation of certain chemical compounds such as fluoropolymers and F-gases’. Fluoropolymers and F-gases are only two of the 6,000 compounds, but it is exactly these two that are of ‘crucial importance for almost every important sector of the economy’. Fluoropolymers makes goods water resistant, non-stick and durable. Their wide usage is also apparent from recent research.

PFAS IN PAPER AND CARDBOARD

Last summer, the Dutch NGO Erase All Toxins and seven European environmental organisations issued an alarming report. ‘Throwaway Packaging, Forever Chemicals’ analyses PFAS in materials that come into contact with food, such as paper and cardboard. One of their findings is that almost one third of the 99 examined products is intentionally treated with PFAS. The presence of PFAS not only causes health and environmental problems, but makes these materials unsuitable for recycling and composting.

In the United States, PFAS was found in an insecticide while the producer of the insecticide had not added it. The Environmental Protection Agency (EPA) looked into the case and concluded that the PFAS has leaked into the insecticide from the plastic packaging. The bottle had been treated with F-gases.

The American NGO Environmental Defense Fund raised the alarm as this process is not only used on jars of one particular insecticide, but on hundreds of millions of polyethylene (PET) and polypropylene (PP) bottles, jars and containers every year. PFAS can leak from all these packaging into food, drink, cosmetics and cleaning products.

In another recent study, 231 cosmetic products sold in the USA and Canada were tested. Liquid lipstick, waterproof mascaras and foundations often contain high concentrations of PFAS. As there is no requirement to list PFAS on the labels, consumers are unaware of the dangers. People ingest PFAS through the skin, breathing or even swallowing. If PFAS then enters the bloodstream, it accumulates, says researcher Peaslee.

Chemours’ GenX was added to the so-called list of substances of very high concern after which the company filed an objection. On 13 September last, hearings were held at the European Court of Justice. Being placed on the list is not only a first step to a procedure to ban the substance group, but requires producers to also provide information to consumers. According to Chemours, low quantities of GenX does not pose risks to the health and the substance should not be included on the list of substances of very high concern.

CALL: STOP THE USE OF ALL PFAS AS QUICKLY AS POSSIBLE!

Plastic Soup Foundation believes that an end must quickly come to the use of all PFAS, with minimal exceptions. We call on companies to not wait for an EU ban, but to stop now. This goes not only for PFAS in products, but also in packaging. Chemours thus needs to end the production of GenX as quickly as possible instead of stalling things by frustrating European decision-making. 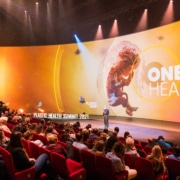 On eco-anxiety and the usefulness of fear
Scroll to top