In our search for the Holy Grail – the solution for the plastic soup problem – a message comes along once in a while which shakes us up at Plastic Soup Foundation. Like this, for example: an enzyme, developed by the French company Carbios, is able to quickly break down the massively used PET type of plastic.

Last September Carbios opened a pilot plant in Clermont-Ferrand and was given a loan of EUR 30 million from the European Investment Bank for further development and scaling up.

The technology is patented under the name C-ZYME™ and it uses fungal enzymes that convert the polymers in plastics into infinitely reusable monomers. It is almost too good to be true. If it is, it would mean that it would be possible to have a completely circular use of plastics!

NATURE RESPONDING TO THE PLASTIC SOUP

Over the years, there have been regular reports about minute organisms that break down plastic. It has been known for a long time that bacteria, fungi and even caterpillars can consume plastic. These organisms are called ‘plastivores’.

A recent Swedish study carried out DNA testing on a large number of plastic pieces both on land and in the sea. That research showed 30,000 different bacteria colonies that produce enzymes that in turn, are able to break down 10 different types of plastic naturally. It is clear that nature is responding to the large amount of plastic lying around. There even seems to be a link between the presence of certain enzymes and localised types of pollution. The researchers talk about a measurable effect, but the natural breaking down process is extremely slow.

The Swedish findings are important primarily for demonstrating that there are several enzymes that can be adapted or manipulated to break down certain types of plastic efficiently in industrial processes. Enzymatic recycling is the term used when the building blocks obtained through this process can be used to make new plastic products. This is a revolutionary development.

THE FIRST BOTTLES HAVE ALREADY BEEN PRODUCED

Carbios has taken 10 years worth of research to produce an enzyme that is suitable for breaking down plastic. The technology was described in Nature in 2020. Carbios succeeded in breaking down at least 90% of PET into monomers within 10 hours. The monomers can be used to make new plastic. This means that virgin plastic is not needed.

What makes it even more interesting is that this application can be used to also break down polyester textiles. The first bottle in the world to be made from textile derived building blocks was presented in 2020. Apart from the new products not being of an inferior quality to the original, the claim is that this form of recycling also consumes less emissions and produces less CO2 emissions.

THE NETHERLANDS & EUROPE PUT MONEY IN

Carbios is a pioneer. Other companies have now also thrown themselves into enzymatic recycling. It is for good reason that Europe is supporting this development. In the Netherlands, the Ministry of Economic Affairs has granted a subsidy to the Back to Mono project, and the Ministry of Agriculture, Nature and Fisheries has granted one to Wageningen University & Research. All this research is directed at exploring ways to get back monomers or building blocks through biochemistry and to maximise the speed of degradation under controlled circumstances. And naturally to avoid being dependent on foreign patents at a later stage.

UNFORTUNATELY NOT A SOLUTION FOR THE PLASTIC SOUP

Despite the presence of plastivores in the environment, the speed of degradation is much too slow to get rid of the plastic. But even if enzymatic recycling would be adopted at a large scale and the degredation would be significantly faster, these technologies are unfortunately not a solution for the plastic soup. It would mean guaranteeing the collection of all the plastic and making the technology available over the whole world. The chance that this will happen is small, given that virgin plastic will probably still be much cheaper.

So we will continue to search for the one and only real Holy Grail.

Read more
Scientists respond to the decision to designate BPA as a substance of very high... 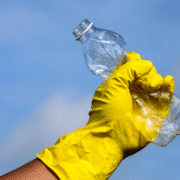 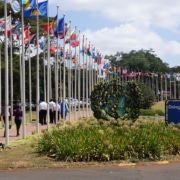 What are the chances of a robust International Plastics Treaty?
Scroll to top