You are here: News Scientists respond to the decision to designate BPA as a substance of very high concern

Bisphenol A, a hormone disrupting substance, has definitively been classified as a ‘substance of very high concern’. PlasticsEurope, the lobby group for the plastics industry, may no longer appeal after the ruling of the European Court on 21 December 2021. PlasticsEurope repeatedly contested the ruling, but always lost.

In Europe, France has the most stringent policy regarding BPA. ClientEarth, that acted in the case as an intervener supporting France, is celebrating the judgement as a great victory: ‘this is not only a victory for public health, but also shows that public authorities can and should resist industry pressure’.

Bisphenol A (BPA) is a chemical substance found in many plastic products including food packaging, plastic drinking bottles, cans, receipts and toys. BPA is used to make plastic hard and enters our food through plastic packaging and other means. Hundreds of tonnes of it enters our biosphere every year. Countless studies show that BPA disrupts the hormonal system of humans and animals. Its damaging effects have been known for 25 years.

At the Plastic Health Summit organised by PSF last October, three scientists explained the different aspects of endocrine disrupting substances in plastic. They were Terry Collins, Patricia Hunt and Jane Muncke. Click on their names to watch their presentations.

PSF asked them for their responses to the ruling of the European Court.

The effects of exposure to BPA emerge slowly and include cancer and reduced fertility and are worrying, says Professor Terry Collins of Carnegie Mellon University. The substance is instrumental in the rapid decrease in fertility. Every year people in the West lose about 1% of the average number of sperm cells. ‘It works a bit like the capacity of the kidneys. If overloaded, at a certain point the protective function will be significantly reduced until our reproductive system no longer works as nature intended it to.’ Looking at the Western sperm counts, we have landed in the ‘functional collapse’ phase (the collapse of our ability to reproduce). And this is just one of the bad health effects of exposure to BPA.

‘AN EPIC STEP IN OUR COLLECTIVE STRUGGLE’

Dr Collins has pinned his hopes on the European Chemicals Strategy for Sustainability (CSS) to put a stop to the production and use of hormone disrupting substances. Collins’ response was ‘The judgment of Court of Justice of the EU that bisphenol A (BPA) must be listed as a “substance of very high concern” for its hormone-disrupting properties on the human body is an epic step in our collective struggle to build a safe and sustainable chemical industry. Thank you and bravo judges of the Court’s Ninth Chamber. It’s inspiring to see such critical judgements for sustainability being issued!’

‘I HOPE THAT THE USA WILL FOLLOW EUROPE’S EXAMPLE’

At the Summit, Dr Patricia Hunt of Washington State University shared her highly concerning research results that include the conclusion that hormone disrupting substances in the body of mothers also affect their children’s later fertility. Hunt is extremely happy about the ruling of the Court and says that ‘It is wonderful to see regulation finally catching up with the science. Europe is leading the way on change that should have happened decades ago. We can only hope that the U.S. rapidly follows suit.’

The standard set by the European Food Safety Authority (EFSA) for daily exposure to BPA has been 4 micrograms per kilogram of bodyweight since 2015. Recently – one week prior to the European Court’s ruling – an expert group of the EFSA had proposed reducing this standard by a factor of 100,000 from 4 micrograms to 0.04 nanogram per kilogram of bodyweight.

Dr Jane Muncke of the Food Packaging Forum is delighted about the ruling of the European Court and the adjustment of the standard announced by EFSA. Muncke considers it unbelievable that governments have permitted the so-called ‘known unknowns’ for so many years. We do not know the health risks of added substances that also react to each other. Much more testing needs to be done before plastic may be brought to market. While she welcomes the ruling, she is not yet celebrating. ‘Society needs to get a better grip on how to manage those industry delay tactics that keep hazardous chemicals on the market for decades despite the science being very clear. Only then will we have reason to celebrate.’ 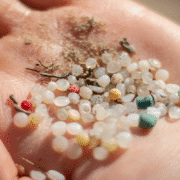