You are here: News Lessons from Melati on how to make change happen

Lessons from Melati on how to make change happen

“There is no other choice than to stay optimistic.”

Indonesian/Dutch activist and change maker Melati Wijsen founded Bye Bye Plastic Bags together with her younger sister in 2013, successfully banned plastic bags/straws on her home island Bali, has done several TED talks, spoke at the United Nations, has been honoured by TIME as part of the annual list of most influential teens, founded YOUTHTOPIA*, and has been involved in much more.

Impressed? What about when I tell you Melati Wijsen is only 21 years old? Yes, she is a member of Gen Z, those born between the late 90s and early 2000s. Her age and impressive accomplishments made her the perfect protagonist and narrator for the documentary ‘Bigger than Us’, which takes her on an emotional and inspirational journey through meeting other young changemakers all over the globe who devote their lives to creating a better world. Bigger than Us will premiere on June 2nd in the Netherlands.

So, how does someone so young find the energy, courage and /means to achieve such things? How has she become so successful in her work of combatting the plastic crisis? What can we learn from her? I decided to interview her through Zoom. Spoiler: the secret, I found out, lies in NOT pretending you can make change happen on your own.

Recycling is no solution

Melati is best known for her activist work, like organising beach clean-ups, which means she has probably picked up more plastic litter than the average person. I am curious what her views are on a ban for all single-use plastic items. She says: “I do believe there are so many single-use plastic items that we should say no to. Plastic straws, plastic bottles to name a few. There are systems that allow for a refillable solution or system. I think that especially on a community basis, as well as on a corporate and government level, we should look at implementing this.”  The plastic that she and other activists pick up from the beaches does not just appear out of thin air, so we discuss the ways companies like Unilever pretend recycling is the solution. Melati believes recycling should be the last option, saying: “I really encourage those producers to radically redesign their products. It has to start from the source, in order to not have this waste ending up in our environment. We have to give it more value. We have to create a circular system in which it doesn’t end up with a waste-filled society.”

A new opponent: the pandemic

The idea that single-use plastic items are more hygienic than the alternatives has resurged because of the pandemic. This has caused a set-back in a big part of the work Melati and her team achieved in Bali. “Unfortunately, if you are ordering food or a delivery in Bali now, it will come in a plastic bag.” “It is a huge step backward and feels like a punch in the gut for many of us who have been on the frontlines for so long, finally trying to get this ban — and now it is not really working.”

Normally, Melati would have responded to this by protesting or going to supermarkets to ask people to use alternatives to plastic bags, but that too is now impossible because of the virus. However, she remains ever the activist. “What we did do while we were all staying at home was a really strong mobilisation with workshops online to really keep and make sure that this conversation didn’t escape.” Now, Melati and her activist network are slowly picking up their work again and organising much needed clean-ups.

Making an impact is a joint effort

Melati believes plastic treaties on their own will not make the same change that can be achieved by collaboration. “At the end of the day we need to look at localized partnerships. How can we foster more space for a meaningful collaboration? That’s between the private sector and activists, it’s between activists and politicians, it’s between likeminded NGO’s and organisations working towards the same goal”. She is adamant to not promote the work NGO’s do separately from each other but thinks instead they should focus on effectively working towards one goal.

Later, she provides an example of how this type of work can really make an impact: “We now have 60 teams all around the world led by kids in middle school or high school who have started their own Bye Bye Plastic Bags branch. That for me was something where I felt Bye Bye Plastic Bags all of a sudden became this living example that kids can do things, that other kids around the world felt like they could be part of a larger movement and stand behind this movement to say no to single- use plastic bags.”

The need of an intergenerational approach

Melati is very optimistic and enthusiastic when talking about younger generations taking the lead in making the world a better place. We discuss how she compares this to older generations. She believes the generations prior to Gen Z are leading more from a place of fear and are stuck in a concept or vision of how things should be. She also thinks a lot about what she hopes older generations can do: “I think the main difference is how we feel this strong sense of urgency, versus they maybe not, because we grew up hearing this on high alert.”

“There is a difference in the level of awareness and urgency in the society that we live in. But if we want to achieve change, we have to have an intergenerational approach. I think that’s really important amongst young people, that we do not forget that. We cannot do it on our own. We need to build those partnerships. We need to have collaborations with those CEOs, and with those political figures to understand what the best way forward is. And I think leading by example is always a great step.”

As she is telling me about her work, I wonder how she finds the balance between taking action and maintaining mental health whilst being confronted with the negativity surrounding this topic. “To be honest, several months before my 21st birthday, it has been the hardest it’s ever been for me. I have really struggled with a lot of things. I have experienced really bad social media hate, to the point where I really felt like I had to go offline. I have experienced certain things here on the island of Bali. Just one challenge after the other, that makes it very, very, very, very difficult to continue.”

How did this become so hard for her? She responds, “The mistake also on my part, which I am still learning, was taking things personally, you know? Of course, the social media stuff is personal. But when partnerships don’t follow through or when governments don’t follow up on their meetings, there was a lot of taking things personally. That’s one of the biggest mistakes I see a lot of activists — including myself — make. In terms of coping mechanisms, I am really, really lucky to be surrounded by an incredible team. And they have been my backbone, honestly. If I didn’t have them, I probably would have quit a long time ago.”

Working together as a team, and collaborating seems to be the red thread in Melati’s work, as well as the documentary she took part in. The goal, she says, “is about keeping in mind the bigger vision, you know? I said this in my last TED talk as well. Remembering you are able to take a step back and that there are many people who will keep going and do the work while you rest and recharge is so important. And I learned that lesson the hard way, I think. By constantly refusing to the point of burnout when I had no other choice than do nothing and come back stronger than ever after the rest has been taken. I have three words to explain who I am: ‘Work In Progress’.”

Staying optimistic is the only way

Melati’s positive outlook on her own development meanders through in the last question I ask her, on how she stays optimistic: “I think there is no other choice than to be optimistic. I fear that the moment, the day, that I give in to this feeling of hopelessness there is almost no point of return. I think that thriving on optimism, but realistic optimism, is key.” She continues, “I know that in our own ways, in our own parts of the world we are creating and mobilising incredible change. And for me, I know there is a long, massive to-do list, but one by one and day by day I think we’re slowly ticking things off.”

Melati comes off powerful and confident, giving us a clear message that one cannot expect to battle any crisis on their own. Be it the plastic crisis, the corona pandemic, climate change, human rights violations, or mental health challenges. We all need to do this together. Crises cannot be combated without collaboration. And if you need a break, take that break, and let others take over for you while you recharge. In wanting to make change happen, I think we can all learn something from her. 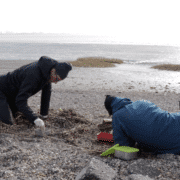 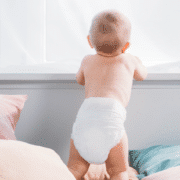 How do you find good plastic-free nappies in the washable nappy maze?
Scroll to top