You are here: News Analysing cobwebs for trapped microplastics – a new method of research

It must have been a strange sight to see researchers with toothpicks removing cobwebs from bus shelters at set times in the German city of Oldenburg. It was a new application of a tried and tested method. That sticky strands of web catch dust particles as well as insects has been known for a long time. Cobwebs have also frequently been used to monitor the air quality. It had just never been done for microplastics.

The results were published in the Science of The Total Environment journal.

The conditions are right: bus shelters are placed along roads where you can expect pollution, and at places with either a lot of or a little traffic. The wind blows and there is draught at the top of the open shelters, where it is too high for things like leaves to get caught in the cobwebs.

The cobwebs are loosened using a wooden toothpick and kept in a preservative. In the laboratory, the plastic particles in the web are removed under very high temperatures and the different types of plastic are identified and counted.

In 2020, the researchers went to the same bus shelters three times: in March to remove the cobwebs from the previous season, and in April and June to take the new cobwebs. As the samples were taken at set time intervals, the quantity of microplastics over a certain period could be determined.

All cobwebs had caught microplastics (with an average of 43.9 μg/mg per cobweb of dry weight). The concentration of microplastics sometimes went up to one tenth of the weight of the cobwebs. Of the microplastics, 90% consisted of PET, PVC and car tyre particles. The composition varied according to the location of the bus shelter.

You would expect that the cobwebs in the bus shelters along the motorways would mostly contain a lot of car tyre particles, but to their surprise, the researchers mostly found a lot of PET fibres. The researchers suspect that these fibres come directly from the daily use of synthetic clothing or indirectly from houses and offices that are ventilated. The PVC probably comes from the synthetic paint that is used for road markings. They also found that the cobwebs in the bus shelters at traffic lights and where the traffic is heavy had the most particles from the wearing down of car tyres.

The researchers claim to have found a cheap and effective method to determine the amount of microplastics that are floating around in a certain area. This method can also be used worldwide. After all, there are cobwebs everywhere.

London has highest measured concentration of microplastics in the air 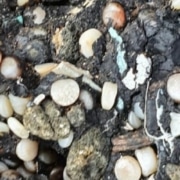 Around 80% of cow and pig meat, blood and milk contains plastic
Scroll to top