You are here: News Unilever recognises that its sachets are causing problems, but is doing nothing about it

Unilever recognises that its sachets are causing problems, but is doing nothing about it

Unilever recognises that the sale of products in mini packaging (sachets and pouches) significantly adds to the plastic soup. In low-income countries, the multinational sells billions of these unrecyclable packets every year. The pollution is enormous and the call for a ban is getting stronger.

The Reuters press agency investigated Unilever’s policy on sachets and, in its article entitled Unilever’s Plastic Playbook, concludes that the multinational does indeed recognise the problem, but is actively lobbying against the introduction of legislation that bans or limits the sale of sachets in India, Sri Lanka and the Philippines.

Unilever talks about a ‘complex puzzle’, but disregards the only solution – to bid sachets farewell.

Unilever introduced sachets in India on a large scale in the 1980s. Since then, countless products in sachets have been sold in a growing number of markets. They are aimed at people with limited purchasing power. Each product, be it shampoo, noodles, chocolate and so on, is wrapped in packaging that cannot be recycled, because this type of packaging consists of several layers. After use, the packaging has no economic value whatsoever. People throw them away or burn them in the open air. Unsurprisingly, according to lists of brands found during clean-ups, Unilever is found to be one of the biggest polluters year after year.

WHY DO YOU CONTINUE TO SELL SACHETS?

‘Why do you continue to sell sachets?’ Unilever placed this question on its website last January, stating that this is the question it is most asked. It is interesting to compare Unilever’s own answer to the question against Reuters’ findings.

Unilever: We are testing refill systems where customers themselves tap the amount of a product that they wish to buy.

Reuters: We visited three shops in Manila (the Philippines) where Unilever had publicly announced refill stations in 2019. In vain. The staff at two of the three locations said that the refill-stations had been removed within one month. Drawing on more examples, Reuters evaluates the situation as greenwashing. A refill is not a real alternative if the sale of sachets continues in parallel.

Unilever: The multi-layered material which sachets are made of makes recycling virtually impossible. We will replace it with a single layer. The packaging can then be recycled. Technical difficulties will be overcome through innovation.

Reuters: Five of these projects were either stopped or did not go beyond the pilot phase. The explanation that Unilever’s press office gave (to Reuters) is that it is a ‘complex technological challenge’ and that there are no easy solutions.

Unilever: We are helping collect packaging and are even collecting more packaging than we sell.

Reuters: Even in countries with a good infrastructure to collect waste, sachets are a disaster. They can only be dumped or incinerated. Previous Reuters research brought to light the fact that Unilever – along with Nestlé, Coca-Cola and Colgate-Palmolive – offers huge amounts of collected plastic to cement kilns. Unilever calls this recycling (while referring to local legislation) and adds excavated rubbish waste to reach its collection target. In the meantime, the cement kilns pollute the air with toxic substances and emit a lot of CO2.

CEO ALAN JOPE: ‘WE HAVE TO MOVE AWAY FROM SACHETS’

In 2020, in answer to the question how the continued sale of sachets relates to the multinational’s plastic policy, Reuters cites CEO Alan Jope as saying: ‘We have to get rid of them. It’s pretty much impossible to mechanically recycle and so it’s got no real value’. So good news for the plastic soup! But two years later, it transpires that nothing has come of this fine resolution.

Reuters’ research shows that the multinational presents itself to the public as the most sustainable multinational, while not taking a single step to reduce the use of sachets voluntarily. According to Reuters it is even worse than this as, behind the scenes, the company is lobbying against legislation that will stop of limit the use of sachets in countries such as India, Sri Lanka and the Philippines.

THE NETHERLANDS TOO SHOULD BE ASHAMED

In November 2016, then State Secretary for Infrastructure and the Environment Sharon Dijksma, while on a trade mission in Indonesia, declared (in Dutch) that the Netherlands would help Indonesia find a solution to the sachets. ‘The environmentally harmful disposable sachets in which noodles and chocolate are packaged create a complex puzzle as it is very important to retain these products for people on low incomes. Dutch companies are excellent in designing creative and affordable solutions to tackle packaging litter.’

Hans de Boer, leader of the VNO-NCW employers’ organisation, added fuel to the fire. ‘Innovative solutions can help the environment and people. We can also export proven solutions to other countries that also deal with a lot of plastic packaging and the associated problems of litter.’

We are six lost years on. Nothing has come of all those promising innovations. Even if there were a technology to recycle sachets, the question remains how all those billions of used sachets can be collected for recycling. Once on the street they are lost. They are also so thin that street sweepers just sweep over them.

There is apparently one goal that will be attained: continue selling the profitable products in sachets unhindered for as long as possible. Profit rather than planet.

It is deeply shameful.

Read more
Around 80% of cow and pig meat, blood and milk contains plastic 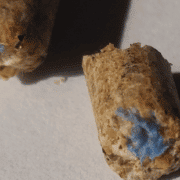