You are here: News Many promises made by corporations are just blah-blah

Many promises made by corporations are just blah-blah

Over the years, one multinational company after the other has pledged to reduce plastic pollution. Each company has often made several promises over time. Now it appears that two thirds of these promises have not been met, have been limited or have been – silently – withdrawn.

This is revealed in research by Deutsche Welle into 98 ‘plastic promises’ that were made over the last 20 years by 24 food and drink companies that are all headquartered in Europe.

GOVERNMENTS LEAVE THE INITIATIVE TO COMPANIES

Government policy to limit the plastic soup partly rests on the promises that multinational and other companies made. In the Netherlands, this can be seen in the Plastic Pact (in Dutch). The objective of this agreement is to promote the circular plastic economy, but the companies involved have nothing to fear if they do not achieve their targets.

Deutsche Welle observed that companies do not or barely take responsibility when a promise they had made is not attained. In the end, without legal measures, governments have few means to really deal with the plastic soup.

The Organisation for Economic Cooperation and Development (OECD), an intergovernmental organisation with 38 member countries that focuses on social and economic policy, recently sketched a horror scenario in which, should policy not change, the plastic waste in the world would triple by 2060. Of this, half would end up on rubbish tips and only 17% would be recycled. By unchanged policy, the current government policy is meant which includes the plastic policy of companies.

For the OECD it is clear that continuing the current policy is not an option. The Global Plastics Outlook argues for ambitious regulations. The organisation compares two scenarios. In the Regional Action Scenario, only the OECD countries take ambitious measures. This is already a step forward. But if you do not want any plastic to end up in the environment in 2060, the Global Action Scenario, with its stricter laws and worldwide application, is the way to go.

EVEN WORSE THAN THOUGHT

The message of the OECD report would be lot more convincing if the compilers had shown how much the self-imposed goals of the multinationals would help in solving plastic pollution. This is shockingly little. And it would have been even more convincing if they had taken into account the fact that two thirds of the promises are meaningless.

Unilever recognises that its sachets are causing problems, but is doing nothing about it

Action multinationals essential to rid the world of plastic soup

Read more
Tonnes of invisible nanoplastics in the Wadden Sea 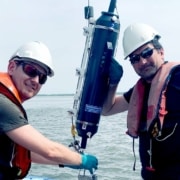 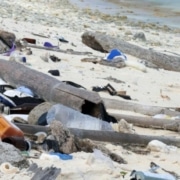