The effects of the plastic soup are easier to identify in animals than in humans. The pollution of the environment leads to numerous forms of endangerment of animal welfare. At least 1400 marine species are affected by plastic, distributed across almost all levels in the marine food chain, from the smallest bacteria to the great whales. The groups most affected by the plastic are sea birds, fish, crustaceans and mammals. Groups such as sponges, anemones, worms and other invertebrates suffer from less plastic.

Animals must deal with the burden of plastic in different ways. Most often, they become entangled in the plastic, followed by swallowing it or using plastic waste as a shelter. Stiffening and swallowing lead to, among other things, injuries, limited freedom of movement and, in many cases, death.

Animals are not always able to distinguish plastic from food. Living organisms that filter water (plankton, shells, balein whales) or live under the surface of beaches (sandworms) are by definition unable to distinguish. Some fish see plastic for visors and target the floating plastic. For example, turtles view plastic bags as floating jellyfish. In the stomachs of the Northern fulmar, which feeds by scooping its open mouth over the surface of the water, plastic is almost always found. In addition, many grazing land animals are also consuming the plastic.

Animals that ingest relatively large pieces of plastic can starve when that plastic seals their gastrointestinal tract. Think of a plastic bag or the remains of a balloon. In such case, the animal will die relatively quickly. Sometimes the mouth is larger than the anus and the plastic pieces are lodged internally for that reason. In the stomach of certain seabirds, turtles or (whale) fish, plastic is regularly found. Fulmars are full of it, whales become stranded on the beach with more than 6 square meters of plastic bags in their belly and turtles need to be freed from huge pieces of swallowed fish nets. Plenty of horrific pictures exist of young albatrosses on Midway that are being fed plastic by their parents.

The plastic can also have an effect on the overall health of the animal. An increase of activity within the immune system may occur, causing the body to react with an inflammatory response. Plastic also has an effect on animal hormone management. It makes them less fertile and they can become a hermaphrodite. There are plenty of studies that have determined certain plastics are carcinogenic. Plastic requires a great deal of energy from animals to cope with, with zero benefits being found for interaction with this man-made material. Read more about health effects here. 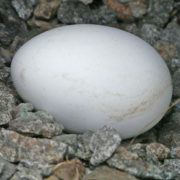 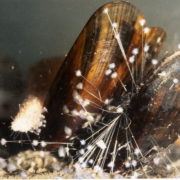 Animals can become entangled in a variety of plastics and consequently die. Abandoned fishing nets, known as ghost nets, have taken the lives of countless victims. Mammals such as dolphins and seals are unable to remain underwater for long periods of time and end up dying relatively quickly. Birds can become tangled in plastic such as the ribbons of party balloons.

Toxic plastic and leaking of additives

Plastics are one of many materials that have the characteristic of attracting persistent organic pollutants (POPs) such as polychlorobiphenyl (PCBs) and polycyclic aromatic hydrocarbons (PAHs). This applies to five of the most manufactured plastics, including polyethylene (PE), polyethylene terephthalate (PET) and polyvinyl chloride (PVC). The longer the plastic in the water, the more toxic it gets through that sponge action. Animals that eat this toxic plastic usually excrete it again. An important scientific question is whether toxic substances can accumulate in their tissues and end up higher in the food chain along the path of bioaccumulation. In the end man is at the top of the food chain.

Japanese researchers have found polybroom diphenyl ether (PBDE), which is added as a flame retardant to plastic, in the tissue of some seabirds. It is impossible that this substance is derived from their natural prey, but is instead coming from the plastic they ingested. According to researchers, this could indicate that poisonous chemicals are absorbed through swallowed plastic into the tissue of this species and quite possibly many more species.

The smallest plastics, nanoplastics, can pass through cell walls and thus migrate theoretically from the gastrointestinal tract to human and animal bodily tissues.

Matter added to plastic can be extremely harmful to the environment and health when these substances leak out of the plastic and then end up either in the environment or in the food chain. This problem is associated with daily use of plastic. Additives that leak into the sea from plastic are immediately diluted by seawater, which means that concentrations are no longer measurable. The leakage of these chemicals play no significant role in the sea. By contrast, see as an example this US report from April 2009.

The most famous and controversial is bisphenol A (BPA). BPA is found in many types of plastic including the packaging of plastic bottles. It is a virtually unbreakable plastic that is easy to clean. BPA may leak under conditions (damage or heating) and contaminate food. The substance behaves as a hormone, especially as the female hormone estrogen. Even small amounts would have harmful effects. An example of the effect of this is the early onset of puberty found in many children today. In Europe, a ban on the sale of baby bottles containing bisphenol A will apply from June 2011.

Despite the objections, BPA is still widely used in plastic products. Most of the BPA production is for making polycarbonate, a hard and transparent plastic that is recognized by recycle code #7.

Phthalates are used as plasticizers for plastic, especially in polyvinyl chloride (PVC). Due to the fact that phthalate molecules move between the polymer chains that plastics are comprised of, over time some of the plasticizers escape and leak into the environment. The phthalates do not completely break down. They can accumulate in small organisms and end up in the food chain as well. Research provides evidence that phthalate worms disrupt human and animal hormone and have carcinogenic properties.

Plastic is made of petroleum and would make it highly flammable. To prevent plastic from burning too easily, fire or flame retardants are added. Plastics use a lot of organobromium compounds such as PBBs (polybromobiphenyls) and PBDOs (polybroom-diphenyloxides). The retardants are incorporated into the following types of plastic:

These plastics find their application in all kinds of electronics, insulation materials, tubes, and so forth. The substances are poisonous and do not break down easily. During combustion, fire retardants form toxic dioxins.

From MF plastic (melamine-formaldehyde) formaldehyde can be released. Also in some plastic bottles and packaging plastics, formaldehyde is used. The substance is classified as carcinogenic. Exposure to the substance may cause irritated eyes, nose, throat or skin. Some people have an allergy to formaldehyde.