Every fall, we hand out Plastic Soup Terrine. This prize is awarded to someone in the business world who is contributing to the fight against plastic pollution.

Once a year, the Plastic Soup Foundation gives the honors to a politician that has contributed to the fight against plastic soup: the Politics Plume. The first international Plume went to MP Mary Creagh for fighting vor a ban on microbeads in the United Kingdom.

The Plastic Soup Foundation nominates politicians and the public decides who will get the prize. Keep an eye on our website and social media channels to see when you can vote again!

Since 1 January 2016 it is forbidden to provide free plastic bags in the Netherlands. Many shopkeepers are willing to donate the extra money they make because of this rule. That is why Plastic Soup Foundation invented the “Plastic bag Award”.

In a growing number of supermarkets, you can donate deposit return funds to the Plastic Soup Foundation. Every year we hand out the Supermarket Award to the store whose customers donated the most money and is at the top of our “Statiegeldladder” at the end of the year.

Do you want to participate with your supermarket? Click here for more information (in Dutch). 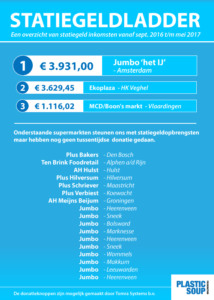