You are here: News Microplastic pollution in Antarctica extremely serious

Until now Antarctica was seen as a pristine and untouched wilderness with relatively little plastic pollution, but the opposite is true. According to a recently published study the quantity of microplastics in the waters around Antarctica are five times greater that presumed up to now.

The Antarctic Ocean covers around 8.5 million square kilometers and represents 5.4% of the earth’s oceans. The marine ecosystem is vulnerable. Krill (small shrimplike animals) make up a large and important component for whales, seals and penguins inhabiting this area. Krill which mistakes microplastics for food are a potentially poisonous source of food.

British researchers have studied all available information about the flow or microplastics to the Antarctic Sea. They have calculated that up to 500 kilos of microbeads from personal care products and 25.5 billion synthetic fibers enter the waters per decade as a result of tourism, fishing and scientific activities in the area. It is unknown whether microplastics flow there from other oceans.

Although the scientific data on exact quantities is limited, it is known that microplastics are found in all layers of the Antarctic Ocean, including the sea floor off the coast of the South Pole. Recent research by Adventure Science shows that the sea around the Antarctic Peninsula contains an average 22 pieces of microplastic per liter. Another study carried out off the Southern Shetland Islands discovered up to 766 plastic particles per square meter at depths between six and 11 meters.

Dr. Catherine Waller, ecology expert and marine biologist at the British University of Hull said in a press release by British Antarctic Survey: “Our results indicate that urgent research needs to be done into the quantities of microplastics in the Antarctic Ocean and around the Antarctic continent.”

Consult our microplastic soup dossier for more information on this subject.

Read more
Plastic microfibers found in the heart of the Himalayas 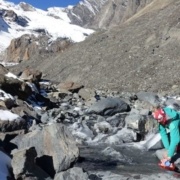