You are here: News How damaging is breathing in microplastics?

How damaging is breathing in microplastics?

Around 16% of the plastic produced annually in the world consists of textile fibers. In recent decades, production has grown by 6% every year and is now around 60 million tons per year. Synthetic clothing is responsible for endless amounts of microfibers, which can even be found in drinking water.

Plastic microfibers are not just in outdoor air; they can also be found inside buildings and, in particular, in the dust on the floor. Research has already shown that we probably ingest microplastics at a rate of 11 particles per hour. These numbers are not surprising, considering that 33% of fibers in indoor environments are plastic fibers. Also, we are likely to ingest more plastic through household dust from textiles than through mussel consumption, as research found out that the microplastics in wild mussels were low compared to household fibers ending up on the surface of the food.

What’s more, studies have shown that it’s raining microplastics everywhere and every day: plastic microfibers have been found in high concentrations in the air of big cities like London, Paris and Dongguan as well as in remote areas like the Arctic or the Swiss Alps.

Does breathing fibers in damage health?

The presence of microplastics in human lung tissue was already demonstrated in the 1990s by scientists investigating lung tissue of cancer patients, who expressed their concern that plastic fibers may contribute to the risk of lung cancer.

Research showed that plastic particles might persist in the lungs, especially in people with lung disease. When particles would remain in the lungs, they likely stay there for a long time because they are bio-persistent, which could cause inflammation. It also matters how long the fibers are because longer fibers appear to be more damaging.

Particle pollution has long been known to damage lung tissues, leading to cancer, asthma attacks, and other health problems. If inhalation of microplastics is sufficiently high, these plastic particles may cause similar health problems.

Textile workers processing, among others, polyester and nylon fibers, experienced coughing, breathlessness, and reduced lung capacity, suggesting a link between microplastic inhalation and the health problems seen in these workers.

Finally, the most recent results on this matter have shown that nylon fibers hinder the growth of mini lungs, while polyester fibers did not. Defense cells in the lungs (macrophages) also attacked nylon fibers when exposed to these plastic particles. These preliminary results were introduced by researcher Fransien van Dijk during the first-ever Plastic Health Summit 2019, as part of research at the University of Groningen.

Microplastic pollution through washing and wearing

Microplastics washed off from synthetic clothes contribute up to 35% of the plastic particles polluting our oceans. Every time we do our laundry, an average of 9 million microfibers end up in the wastewater treatment plants that cannot filter them, and because of that, these fibers end up in the ocean. Also, just by wearing synthetic clothes, plastic fibers are constantly being released in the air.

Read further about this issue on our dedicated Ocean Clean Wash campaign website.

Donate and make a difference

Science is at the forefront of everything we do. We work closely with universities and want to keep you up to date with the latest knowledge and developments. For this we also need your support, help us by making a donation! 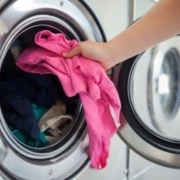 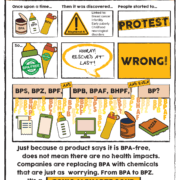 Companies putting public health at risk by replacing one harmful chemical with...
Scroll to top