You are here: News Inconceivable, allowing plastic in livestock feed

In 2018, Andrew Rock, a farmer in England, saw pieces of blue plastic in the pellets that he fed his pigs. There were a couple in every bag of feed. He put them aside and took photos. Andrew initially thought that they were a production error but the supplier assured him that this was not the case. It was just a product manufactured in line with the prevailing norms.

His story was published in The Guardian newspaper. Though shocking, it did not lead to a change in legislation.

Rock lives next to a biscuit factory. He used to collect leftovers there which he fed to his pigs. But with the introduction of the circular economy, things were organised differently. Not only food manufacturers, but supermarkets too have products that are unsellable because of packaging errors, expiry dates and so on.

In the circular economy leftover food is not waste, but raw materials. All the leftover waste streams are brought together and processed to make livestock feed. This includes leftover food such as sauces, bread and confectionary that are often packed in plastic. The plastic needs to be separated from the leftover food, but the process results in irretrievable pieces of plastic that remain in the food. These then become part of the livestock feed. The proportion may be low, but given the scale of plastic packaging, it is a lot of plastic. Andrew heard from his supplier that, apart from biscuits, his livestock feed also contained bread and bars of chocolate.

The Guardian investigated the issue further. The United Kingdom was then part of the European Union and Europe banned packaging materials in livestock feed (Regulation EC 767/2009, annex III). How can plastic in livestock feed be legal in that case?

The newspaper explained that the United Kingdom permitted 0.15% (dry weight) plastic. This was considered a safe limit and other EU countries uphold this percentage too. Indeed, the Netherlands too has had a limit of 0.15% since 2006. The Netherlands Food and Consumer Product Safety Authority enforces this and can levy fines for non-compliance. We do not know if pellets with visible plastic happens to be sold in the Netherlands.

PIGS MAY EAT A PLASTIC BAG EVERY FOUR DAYS

In the meantime, the BBC also visited Andrew Rock. In one response someone calculated that one adult pig of 400 kilos eats up to four kilos a day. Assuming the 0.15% weight, the pig may thus legally eat six grammes of plastic a day. This is about the quantity of plastic in one plastic bag or one credit card. But pigs weighing 400 kilos are an exception.

If you take the average weight of pigs for slaughter in the Netherlands – almost 100 kilos – that eat 1 kilo of feed every day, the pigs could be eating 1.5 grams of plastic every day. In four days time, each pig may have eaten that entire plastic bag.

And this because we firmly believe in the circular economy …

New research from the Free University of Amsterdam commissioned by the Plastic Soup Foundation shows that plastic is present in our food.

But in any case, sign the petition for plastic free livestock feed.

Around 80% of cow and pig meat, blood and milk contains plastic

Plastic Soup on land: agricultural compost is polluted with plastic

Read more
Unilever recognises that its sachets are causing problems, but is doing nothing... 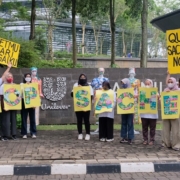 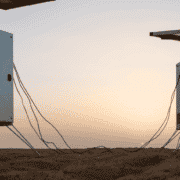