You are here: The Issue Plastic in the environment Plastic production and decomposition

Plastic does not decompose. This means that all plastic that has ever been produced and has ended up in the environment is still present there in one form or another. Plastic production is booming since the 1950s. For this reason, and as plastic is non-biodegradable, there is a build-up or accumulation of plastic as more and more is released into the environment. So what happens to plastic in the oceans? It accumulates in certain places due to rain, wind, or ocean currents, but some of it might simply stay in places where plastic waste is dumped. 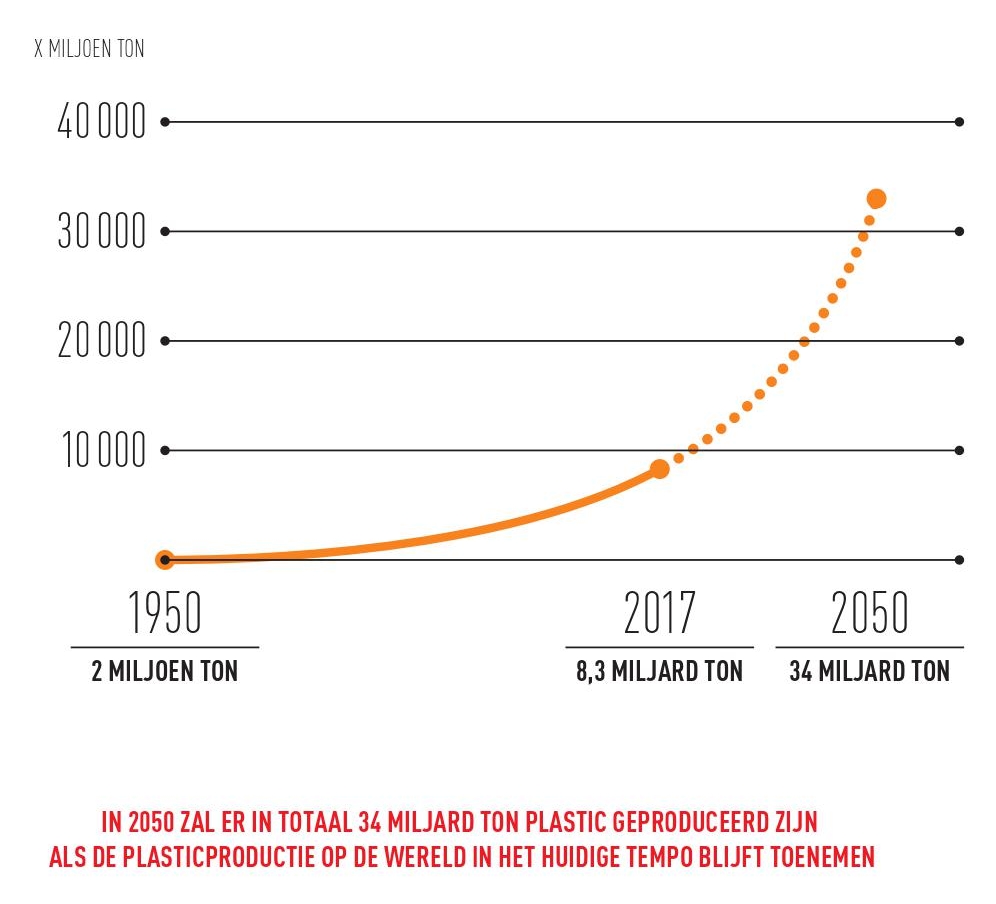 Plastic production keeps growing at a rapid pace. It is estimated that about 3% of all plastic produced every year ends up in the ocean. Since the large-scale introduction of plastic after the Second World War, a total of 8.3 billion metric tons have been produced. Of this amount, until 2015, 6.3 billion tons have become waste. Only 9% of that waste plastic is recycled and 12% is incinerated. The remaining 79% ends up in landfills or in the environment, where they will stay forever in one form or another, as plastic does not decompose. World production of plastic increased from two million tons in 1950 to 380 million tons in 2018 (this number includes plastic textile fibers). In 2017, the world produced nearly 350 million tons of plastic (excluding fibers). About half of all plastic on earth has been produced in the last thirteen years. If the current trend continues, around the year 2050, there will be about twelve billion tons of plastic in landfills and in the environment. More plastic is being thrown away than we can clean up, even though we are doing our best. The only way to reduce and prevent plastic pollution is to produce and use much less plastic.

For many countries, the rainy season is also the plastic season. The banks of rivers are washed clean with heavy rain. Those rivers carry all the plastic debris that used to be on the banks to the sea. Then, some of it is deposited on beaches. In Bali, famous tourist beaches were covered time and time again with a thick layer of plastic; a ‘garbage emergency’ was declared in January 2018, after it had rained for five days. Bulldozers were used to clean up the beaches. The beachfront in Durban, South Africa, was also full of plastic bottles after heavy rainfall. In countries such as France, Spain and Italy, half of all waste still ends up in landfills. Much of this plastic blows into the ocean and floating plastic is easily driven by the wind.

Plastic breaks down into millions of tiny plastic particles, but never fully disappears. Learn more about the plastic break down process and its dangers.

Ghost nets are fishing nets that have been abandoned in the oceans. Marine animals like turtles and dolphins get entangled in them and die.

Microplastics pollution comes from plastic breaking down into millions of pieces. Microplastics end up in the ocean via drains or through other routes and cannot ever be cleaned up.