You are here: News London has highest measured concentration of microplastics in the air

London has highest measured concentration of microplastics in the air

Amsterdam, 10 January 2020 – Nowhere have so many microplastics in the air been measured as in London. The vast majority of these microplastics (92%) are fibres from synthetic clothing and floor coverings. Airborne microplastics are part of fine dust. Inhalation of fine dust can lead to all sorts of health complaints.

For a month, microplastics descended from the air twice a week on the roof of a nine-story building. Each individual sample contained more microplastics than was measured in Paris and the Chinese city of Dongguan. London itself is probably the source of the microplastics with fanning out effects on the wider environment, but it is difficult to indicate exactly where the tiny fibres come from. This study appeared in the scientific journal ‘Environment International’ at the end of last year.

Microplastics are created by the fragmentation of plastic. The high percentage of fibres measured in London is remarkable. These microfibres are released when synthetic textiles and carpets wear out or are washed. Twenty times as many microplastics of the same size were measured in London as in a remote location in the Pyrenees. Furthermore, the researchers found that weather conditions have little influence on the number of microplastics that have descended, while a study on microplastics fallout in Paris seemed to indicate a connection with rainy weather.

A high concentration of dust leads to all sorts of health complaints. The study notes that worldwide initiatives are therefore being taken to reduce particulate matter originating from traffic or the burning of wood. However, there are hardly any initiatives aimed at reducing microplastics in the air.

As a result of the annual growth in the use of plastics and synthetic textiles, in particular, the composition of the fine dust will change; the proportion of microplastics will increase. The researchers advocate more basic research into the presence of microplastics in the air and the exposure of people. This knowledge is indispensable in order to better understand the possible role of microplastics in relation to health problems associated with particulate matter. For example, watch the presentation by Fransien van Dijk during the Plastic Health Summit last October.

The research in London was led by Dr. Stephanie Wright of King’s College. She was also a speaker at the Plastic Health Summit. Wright: ‘An important next step in predicting risk is to estimate human exposure to airborne microplastics’.

Read also – Are we getting sick of plastic? Strong decrease in growth of airways

Read also – It rains microplastics, everywhere and every day 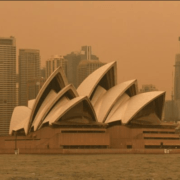