2016 was an important year in the fight against plastic microbeads and other microplastics in personal care products. Many countries have introduced a ban or are about to. That is why the theme of the Politics Plume this year is the international fight against the microbead. Without this fight, it would be unthinkable for the new Prime Minister of Great Britain, Theresa May, to have made the following statement, as she recently did, in the British parliament: ‘Microbeads clearly have an impact on marine life’.
Every year, the Plastic Soup Foundation awards a Plume to a politician, who has taken action against plastic soup. Up to now, only national politicians have been nominated. This year, we have taken a look over the border and the general public can vote for one of the following:

1. Barack Obama. the president of the United States signed the Microbead Free Waters Act at the end of 2015. The act bans the sale and production of cosmetics containing microbeads. It is the first of its kind in the world to apply to a whole country, and it stimulated other countries to follow suit.

2. Mary Creagh, Member of British Parliament (House of Commons) on behalf of the Labour Party, chaired a select committee on microplastics in personal care products. The committee, which consisted of representatives from all parties, unanimously recommended that the British government introduce a ban.

3. K. Kellie Leitch, Employment Minister in Canada, has added plastic microbeads to the List of Toxic Substances. Thus creating a legal basis for a ban. It is the first time that plastics in the environment have been classified as toxic. This may and will serve as a serious precedent for other countries.

4. The Department of Waste Management Director Wu Sheng-chung (吳盛忠) from the Environmental Protection Administration (EPA) in Taiwan. The debate on banning plastic microbeads in personal care products has also been held in Asian countries. Wu Sheng announced a ban.

5. Sharon Dijksma, deputy minister of infrastructure and the environment (for the Dutch Labour Party), chaired a meeting of the European Council on 20 June 2016 and called for forceful EU policy to combat plastic soup, including ‘a proposal for a ban on micro-plastic particles in cosmetics’.

Who of these prominent players on this international topic earns the Politics Plume? 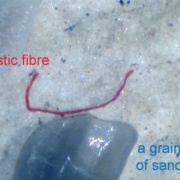 More than 700,000 plastic fibers for every 6 kilos of laundry
Scroll to top