You are here: News Pyroplastics: a new type of plastic pollution

Amsterdam, 11 September 2019 – Pyroplastics are floating plastic pebbles. They are found on, among others, the coast in the southwest of England and are barely distinguishable from real pebbles. Only when you pick them up, you notice that they are much lighter. Having spent years in the water, they gave them their round shape and stone grey color. This phenomenon is a new chapter of plastic soup. Read the scientific article on the discovery in Science of The Total Environment.

Everywhere in the world waste plastic is burned to clean it up. If that happens in the open air and near the sea, the remainders can end up in the water. In 2014, a new type of stone was first described: plastiglomerate. The name is a combination of plastic and conglomerate, the geological indication for sedimentary rock. Melting plastic mixes with other materials, such as coral, lava stone or shells, and forms a kind of rock which until recently did not exist. Pyroplastics are also remnants of melted plastic, only not mixed with other material. This is the case, for example, when plastic is burned on ships and thrown overboard.

Unlike plastiglomerate, pieces of which are found on beaches, pyroplastics have been eroded by floating in the sea for many years. Research indicates that they consist of polyethylene, polypropylene or a combination thereof. Further analysis also indicates the presence of heavy metals that have long been banned. This implies that these pieces of pyroplastic have been present for a long time. Their shapes were similar to real stones shows that similar erosion processes take place. The process, however, is infinitely faster for plastic than for natural stone.

Unlike the usual plastic waste found on beaches, unfortunately, the pebbles are barely recognized. As a result, we underestimate the amount of washed-up plastic, said environmental researcher Andrew Turner at the University of Plymouth.

Read more
WHO calls for more research into the health effects of microplastics: The first... 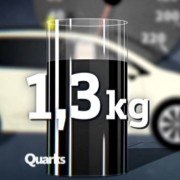