You are here: Gezondheidseffecten Are babies sufficiently protected against microplastics?

For the first time, scientists have found microplastics in the placenta. Recent research also shows that babies consume 1.6 million microplastics a day through food from plastic bottles.

How will the government ensure that children get a healthy start, both in the womb and during the first years of life?

MICROPLASTICS IN THE PLACENTA

Scientists have found twelve microplastics in four of the six placentas they examined using a spectroscopic technique. The microplastics were found in all parts of the placentas. The type of plastic (polypropylene) could be identified from three particles, and all particles had color pigments. The ultramarine blue, also found, is used in cosmetics.

The microplastics probably reach the placenta through the mother’s circulatory or respiratory system. The placenta forms the separation between the mother’s blood circulation and that of the embryo. Hormones and antibodies are exchanged via the placenta. The researchers point out several possible harmful effects, e.g., certain substances in the microplastics can disrupt the hormone balance.

The study, which the media reported last month, has now been published in Environmental International.

The Irish study published last year that babies are given 1.6 million microplastics a day through prepared milk formula made from polypropylene plastic bottles caused a stir in the media. However, Dutch information sites such as Waarzitwatin and the Nutrition Centre see no reason to change existing advice. Damage caused by microplastics for babies has not been proven beyond doubt.

Meanwhile, babies remain exposed to micro and nanoplastics. Plastic Soup Foundation, therefore, argues that the official advice should be to use glass bottles. Furthermore, there should be explicit warnings about the danger of microplastics when using polypropylene bottles.

QUESTIONS OF PRINCIPLE IN CHAMBERS

Microplastics are everywhere; in our food, in our drinks, and in the air we breathe. How will the government ensure that fetuses and babies come into contact with microplastics as little as possible? Will the government choose the path of the information sites in response to the parliamentary questions posed by Dik-Faber? They state that nothing is wrong as long as microplastics’ harmful effects have not been scientifically proven. Or does the government opt for measures based on the precautionary principle?

Maria Westerbos, director of the Plastic Soup Foundation: ‘The indications that microplastics can be harmful in the body are piling up. We welcome the fact that the Lower House is putting this critical issue on the agenda.’

Read more
Are (school) buildings made of plastic that sensible? 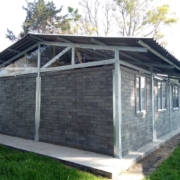 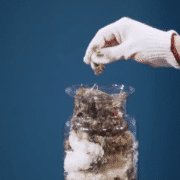