You are here: News This is the time for a ban on intentionally added microplastics

This is the time for a ban on intentionally added microplastics

The European Union wants to curb the use of microplastics that have been intentionally added to products. These concerns products such as cosmetics, detergents, paints, and pesticides. The goal is to ban microplastics that are a danger to the environment and human health.

Therefore, in 2019, the European Commission asked the European Chemicals Agency (ECHA) to develop a proposal for a restriction on “intentionally added microplastics” in products. In the meantime, ECHA has published its opinion. It makes proposals on what should be understood by ‘microplastics’ and which polymers should be exempted from the restriction. In addition, it also advises on transition periods that would be necessary to remove microplastics from certain products. The proposal is now in the hands of the Commission and the member states.

The European Union wants to stop the pollution of 500,000 tons of microplastics, mainly in rivers and seas. The restriction has many potentials, but the many exceptions and long transition periods now proposed by ECHA make this goal difficult to achieve. Moreover, current microplastic pollution will be able to continue for almost a decade.

PSF HAS BEEN BRINGING ATTENTION TO THE MICROPLASTIC PROBLEM FOR YEARS

For a long time, we have been drawing attention to the problem of microplastics and the environmental and health issues it creates. Among other things, through the Beat the Microbead campaign and our BTMB app, Plastic Soup Foundation is raising awareness about the presence and danger of microplastics in cosmetics.

Because of our deep concerns about the microplastics problem, Plastic Soup Foundation, along with other European NGOs – such as EEB and Client Earth – published a position paper in response to the ECHA proposal. This paper sets out our major reservations about the proposal.

THE NETHERLANDS: GO FOR MORE MEASURES!

The European Commission will formulate legislation in response to this proposal, after which the member states will vote on it. We have sent a letter to various Dutch ministers to draw their attention to the shortcomings of the ECHA proposal and to push for more far-reaching legislation.

This is the time to address this problem and to restrict the use of ALL intentionally added microplastics. The evidence says it all: action is needed now, not many years from now.

WE NEED YOUR HELP!

Please help us to continue our fight against microplastics in cosmetics by supporting our crowdfunding. Every cent helps us enormously! 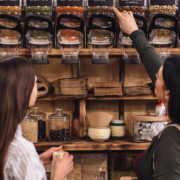