You are here: News At no.3: the packaging of McDonald’s

At no.3: the packaging of McDonald’s

September 2019: Also at the 3rd place of our World Cleanup Day hit list is an iconic brand: McDonald’s. The easily recognizable straws with their red and yellow stripes and the Big Mac and McFlurry packaging have been polluting our Dutch landscape since the early 70s. And not just ours: with more than 37,000 branches in 120 countries, McDonald’s leaves a large plastic footprint all over the world.

For many people, McDonald’s is the symbol of the disposable society. Millions of packaging and straws pass through all 37,000 locations every day and are thrown away within minutes. But McDonald’s also wants to improve his life. This year, the hamburgers chain is once again taking part in World Cleanup Day and has set up a special campaign: Better M.

This campaign aims to ensure that by 2025, only packaging made from renewable, recycled or certified materials will be used. Undoubtedly, the announced new European legislation has given a push in the right direction, as from next year, disposable plastics such as cotton swabs, straws and cutlery will be banned throughout the EU.

The fast food chain has already calculated the plastic savings that ‘Better M’ will bring Europe: 1200 tons of plastic per year by no longer serving a loose lid with the milkshake; another 1200 tons by replacing the plastic lid on the cup of soft drinks in France with one made of natural fibers; and millions if not billions of plastic straws by rolling out a new, ‘further developed paper straw across Europe’.

Finding a suitable replacement for such a plastic straw is not easy. After customers had previously complained about the ‘soggy’ paper successors and McDonald’s, therefore, switched to a thicker paper version in England and Ireland, there was a lot of fuss because the thicker version turned out not to be recyclable.

In an attempt to give an environmentally friendly twist to the plastic straws and perhaps make everyone forget the horrible images of turtles with straws in their noses, a new swimwear line was launched this summer: swimming trunks and swimsuits made from old stocks of McDonald’s straws and with the well-known red and yellow stripes. 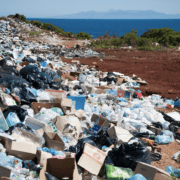 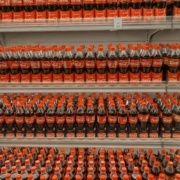