You are here: News New greenwashing trick by Unilever and Nestlé: plastic waste for cement kilns

Plastic in many countries is dumped in landfill sites. It could be used as an alternative fuel. Multinationals are increasingly investing in excavating landfill sites to meet their pledges about plastic. The cement industry is a grateful customer and uses the cheap fuel to reduce its reliance on coal. This is not a good development.

Research carried out by the press agency Reuters has unearthed nine partnerships that multinationals such as Unilever, Nestlé, Coca-Cola and Colgate-Palmolive have forged with the cement industry in various countries. Reuters exposes the goings-on and dispels myths about recycling and collection.

RDF: A REDISCOVERED SOURCE OF ENERGY

The issue is about revaluing a technology called Refuse Derived Fuel (RDF). In the process, the valuable materials such as glass and metals are removed from the waste. What remains is a mixture of plastic, biomass and paper. That mixture has an incineration value and, once dried, can be processed into pellets to be used as fuel. The cement industry’s incineration kilns are a desirable destination. So in one go, the landfill is cleaned up, energy is produced, and the energy intensive cement production process avoids using coal.

Unilever has pledged that it will collect more plastic packaging than it sells. What the concern actually means by this is demonstrated by a project in Indonesia. Bantar Gebang, an enormous mountain of waste close to Jakarta, will be excavated and the RDF used by Solusi Bangun Indonesia’s cement kilns on West Java. The contract was signed at the end of 2020. This project will generate an estimated 1,000 tonnes of RDF, 80% to 90% of which is plastic, every month. According to Reuters, Unilever is financing a second RDF project for the cement industry on Java, in Cilacap. RDF is included in Unilever’s worldwide collection goals.

NESTLÉ GREENWASHING: ‘PLASTIC NEUTRAL’ THANKS TO THE CEMENT INDUSTRY

In August 2020, Nestlé Philippines signed a long-term contract with CEMEX Holdings Philippines to excavate landfill sites in the province of Cebu. The material, mostly plastic, will also generate fuel for cement kilns. Nestlé says that the recycling and the excavation of plastic is part of its pledge to recycle all its plastic packaging by 2025. Just one month later Nestlé announced that it had collected more plastic in the Philippines than it had produced and so had reached ‘plastic neutrality’. Nestlé also excavates the largest landfill in Costa Rica. There, Nestlé Costa Rica reached ‘plastic neutrality’ in October 2020.

THE OTHER SIDE OF THE COIN

At first glance it looks like a win-win. But it is definitely not so. Under the pretense of collecting plastic or achieving recycling goals and ‘plastic neutrality’, the multinationals can continue to sell their billions of products of all sizes packaged in plastic. There are also other objections.

Action multinationals essential to rid the world of plastic soup 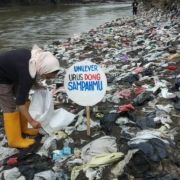 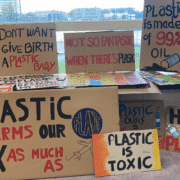 Join us during the Climate March
Scroll to top