You are here: News Banks unscrupulously invest in plastic

Eight European banks have lent EUR 95 billion over the last three years to just 14 companies that are responsible for the plastic soup. Among these companies are oil multinationals such as ExxonMobil and Shell, chemical giants such as BASF and INEOS, and food giants such as Coca-Cola and Nestlé.

Almost 80% of the capital was made available by just four banks: HSBC, Deutsche Bank, BNP Parisbas and Santander. Very few or no environmental conditions were attached to the loans.

Facing Finance, the German sister organisation of the Dutch Eerlijke Bankwijzer, concluded that the eight financial institutions are largely responsible for keeping the plastic soup going. Read the press release here and the English summary.

The only Dutch bank to be examined was the ING. Of the eight financial institutions, the ING emerged as the best in terms of its plastics policy. The bank says that it takes the plastic problem seriously and it has subscribed to the Ellen MacArthur Foundation’s New Plastics Economy Global Commitment. The degree to which these promises are turned into deeds is, however, completely unclear. ING does not rule out investing in American shale gas and limits plastic reduction measures to its own offices.

Plastic Soup Foundation contributed a case study about Shell’s plastic factory in Pennsylvania to the report.

Shell invests billions of dollars there in plastic production based on shale gas. The company does not have any interest at all in reducing plastic and is banking on a future in which ever more plastic will be used.

The flood of new plastic not only adds to the plastic soup, but the energy intensive plastic production is also a serious threat to achieving the climate goals. Shell does not include the greenhouse gas emissions from plastic in its CO2 accounts as plastic is not an energy product.

The banks look away. They talk a lot about reducing their own plastic consumption, but do not set any conditions when lending capital to multinationals who earn their living from the production and use of plastic. The report therefore contains urgent recommendations for banks such as: 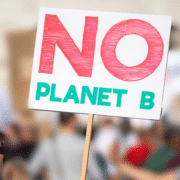 Plastic and the climate: two sides of the same coin
Scroll to top